When David Birnbaum became the Quebec Member of the National Assembly for the riding of D’Arcy-McGee, he was excited to learn that he had the privilege to bestow medals to other members of the community.

D’Arcy-McGee encompasses the mainly Jewish suburbs of Côte Saint-Luc, Hampstead and parts of NDG. Under riding distribution, its reach will be expanded after the next election.

Since its formation in 1966, D’Arcy-McGee has been represented by only five individuals, each of whom are Jewish: the late Dr. Victor Goldbloom, a paediatrician who sat in the cabinet as Minister of the Environment; Herbert Marx, the MNA who rose to become Minister of Justice;  Robert Libman, who founded the anglo rights Equality Party and after serving in office became became regional director of B’nai Brith in Quebec; Lawrence Bergman, whose term from 1994 to 2014 was highlighted by his appointment as Minister of Revenue and Chair of the Liberal caucus; and of course Birnbaum, a former director of Canadian Jewish Congress in Quebec and head of the Quebec English School Boards Association before jumping into politics.

Two years ago, Birnbaum introduced the first-ever D’Arcy-McGee National Assembly Citizenship Medals. Serving on the jury were his predecessors Goldbloom, Marx, Libman and Bergman.  Goldbloom passed away just over a year ago, but when the third annual Medal presentation took place last week in Côte Saint Luc, his widow Sheila represented him.

“I’m privileged to serve a riding population that consistently distinguishes itself by its community involvement, compassion and leadership,” said Birnbaum.  “We are all beneficiaries of this dedication.”

A nice touch, Birnbaum introduced the Victor Goldbloom 'Vivre Ensemble' essay contest last year. It is bestowed to one Secondary student studying in the riding. This year, the student winner was Reisa Gilfix, a Grade 10 student at Herzliah High School.  “Canada has flourished by welcoming people of different backgrounds, allowing them to maintain their identities while becoming Canadian,” she said in her winning essay.  “It is an example of ‘Vivre Ensemble,’ where ultimately, no matter what type of hyphenated Canadian, all can develop a common set of values and a vision of Canada as a free, democratic, peaceful, and open country.”

Two of the three honourees at the D’Arcy-McGee National Assembly Citizenship Medals this year were from the Jewish community: the incredible Baruch Cohen and the dynamic Susan Wener. Recognized posthumously was Jean Lapierre, the former politician and broadcaster who touched the lives whose media expertise was credited with bringing the Anglophone and francophone communities closer together.

Baruch Cohen recently celebrated his 97th birthday. During World War II, he survived pogroms, antisemitism, state-sponsored tyranny and forced labour camps in Romania. He escaped to Israel and later made a life here in Montreal with Sonia, his wife of 73 years. Upon retirement from his position as a financial officer, he completed a Master's degree in Jewish Studies. He subsequently devoted 30 years of volunteer service as Research Chair of the Canadian Institute for Jewish Research (CIJR) and spearheaded the first Holocaust commemoration in memory of Jews killed in Romania and Transnistria, an annual event for over 23 years now.

A book of his essays and poetry, edited by Stanford Professor Dr. Joyce Rappaport, was published earlier this year. A student intern at CIJR, Alex Enescu painted this apt portrait of Baruch Cohen: "On a personal level, he has taught me that even in the darkest places, one can still find compassion and generosity. I’m grateful to know Mr. Cohen."

The second recipient, Susan Wener, has dedicated the past 30 years of her life to helping others. A therapist for people struggling with life-threatening illnesses, Wener speaks across Canada at literary festivals, medical conferences, universities and libraries, touching on subjects such as the doctor-patient relationship, integrative cancer care, overcoming obstacles and other topics related to health and well-being.

Following a near-death experience at 18, Wener knew that her mission would be to work with the gravely ill and she hasn't looked back since. Her  moving memoir, Resilience, and her recent TEDx talk have reached thousands, far beyond our community’s borders. She is the first and only Natural Health Consultant to sit on the Gynecological Oncology Tumour Board at the Jewish General Hospital.  Dr. Walter Gotlieb, Director of Gynecologic Oncology at the JGH - Segal Cancer Centre, noted in his letter supporting this nomination: "Susan's message cuts through race, culture, gender and age, going directly to the soul of each of us who want to access our power for resilience and a life of meaning."

In her acceptance speech at the National Assembly Citizenship Medals event, Wener said that she feels obligated to give back to the community. “Years ago I decided that I would not live a wasted life,” she said. “No matter what happens we need to know that we have the capacity to live extraordinary lives.” 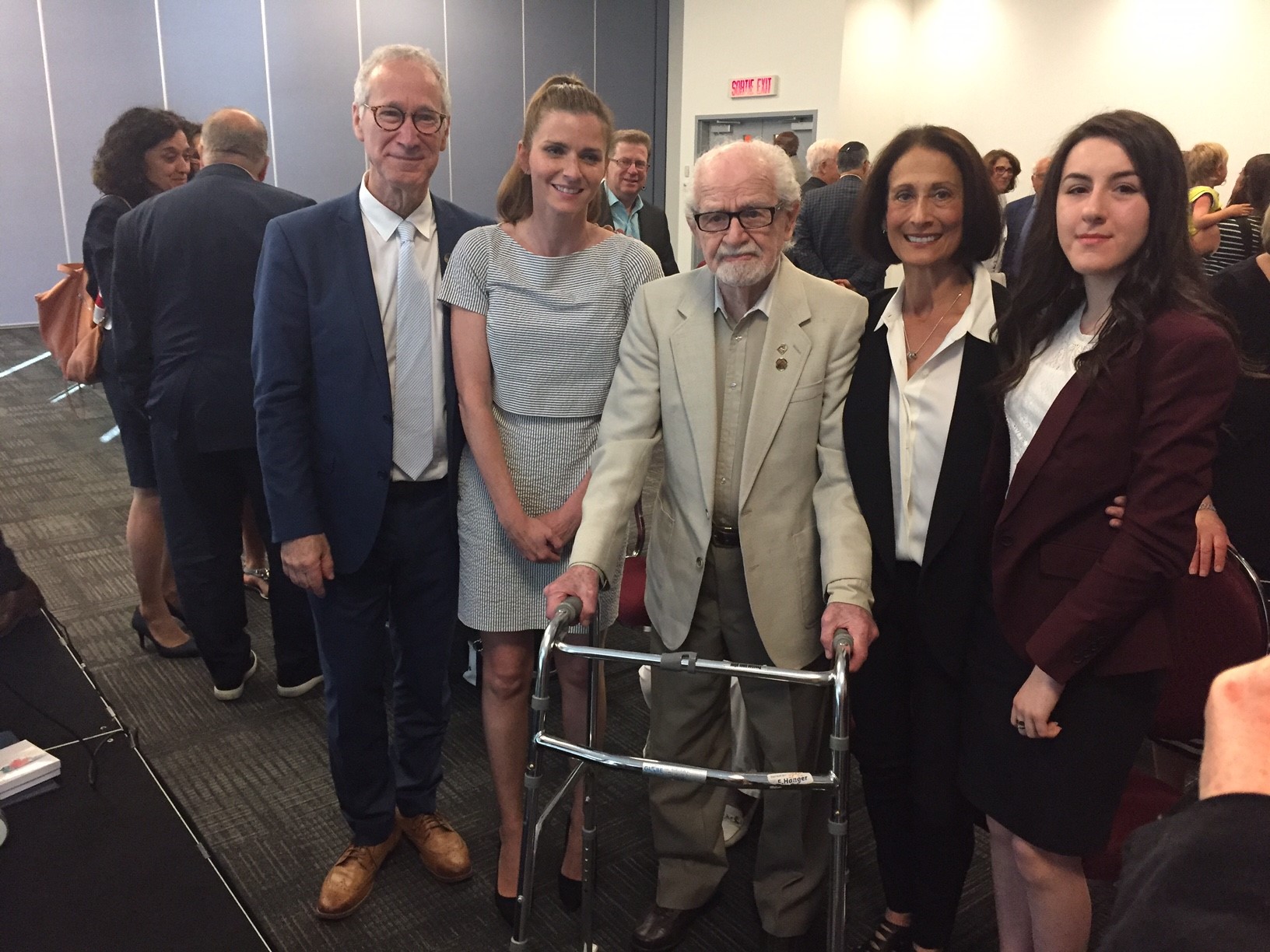 Jean Lapierre, who was honoured posthumously, was a member of Parliament, Minister and political analyst on English and French radio and television. He died tragically along with four members of his family in a plane crash in 2016. Lapierre's commentaries as a political analyst garnered huge audiences in English and in French, and inevitably elicited reactions from politicians, journalists and other avid enthusiasts of local politics. “What happens in Quebec City and Ottawa can sometimes seem remote and isolated from our lives in Côte Saint-Luc, Hampstead and Western Montreal,”  Birnbaum said. “ Jean Lapierre made it less so. He deserves our recognition for enriching our lives and widening our horizons.”

Lapierre’s daughter Marie-Anne Lapierre accepted the award on his behalf.

Quebec Lawrence Bergman David Birnbaum D’Arcy-McGee Victor Goldbloom
Published : Jun 21, 2017
Do you like this post?
Tweet
Have you experienced antisemitism, racism or discrimination? Report an Incident