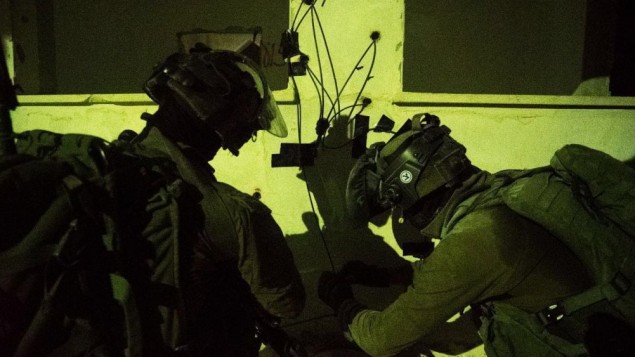 Israeli forces have demolished the family home of the Palestinian assailant who murdered a 13-year-old Israeli girl in June.

A large military force, including the Combat Engineering Corps, razed the family home of Muhammad Nasser-Tarayrah early Monday morning. Last week, Israel's Supreme Court approved the demolition of the terrorist's family's home. Muhammad Nasser-Tarayrah, a 17-year-old Palestinian, violently stabbed sleeping Hallel Yaffa Ariel multiple times in her bedroom after breaking and entering her family's home on June 30. Nasser-Tararyah's family supported the attack and were aware of his intentions months before he murdered Ariel. He was later praised by his mother and sister as a hero.

Here is a video of the home being demolished by Israeli forces.

Nasser-Tarayrah's family was originally served the demolition order on July 5 but appealed it with the help of the Center for the Defense of the Individual Non-Governmental Organization, an Israel-based organization that assists Palestinians subjected to "the Israeli occupation which causes severe and ongoing violation of their rights." The order was kept but with the alteration of one component, avoidance of the destruction of two extra floors. The Nasser-Tarayrah family lived in a three-story apartment building, the original court sentence ordered for the destruction of all three floors, despite the fact that the family lived on the second floor only.

Israel employs a 'policy of deterrence', where if a terrorist is killed during an attack their home will be destroyed. Homes are only demolished if there is sufficient proof that the family of the terrorist supported their actions and have similar intentions. This policy leaves the supporters of terrorism against the Jewish state homeless. This policy is intended to discourage future attacks with the threat that they will lose their homes. Critics of the policy denounce the demolition of homes with the claim that it is collective punishment.

Under international law, a state with a military presence in a territory not under its full jurisdiction must enforce and uphold the laws of that territory. In the West Bank, the Israeli forces enforce and uphold the laws that have and currently exist, these are referred to as Israel’s Emergency Security Regulations. According to section 119 of Israel’s Emergency Security Regulations, the military commander of a given area “has the right to order the demolition of any house, structure or land” of anyone who committed a violent act or assisted someone who committed a violent act.

The teenager was shot and killed by Israeli security forces as he was attempting to flee the town. Nasser-Tarayrah broke and entered into the Israeli home from his nearby village Bani Naim in the West Bank, near Hebron. A member of the town's emergency response team was also injured in the attack. Prior to the attack, Nasser-Tarayrah was posting blatantly antisemitic and anti-Israeli content on social media. He declared his desire to become a martyr for the Palestinian cause, he went so far to say, "Death is a right and I demand my right," on June 25.