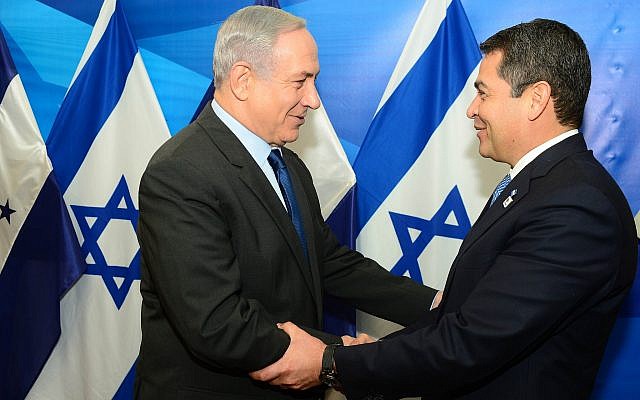 BRASILIA – Honduras will be moving ahead with plans to open its Israel embassy in Jerusalem, and Israel is in talks to open its Honduran embassy in Tegucigalpa, following a meeting between Israeli Prime Minister Benjamin Netanyahu, Honduran President Juan Orlando Hernandez and U.S. Secretary Mike Pompeo on Tuesday.

The meeting occurred on the sidelines of the inauguration of Brazilian President Jair Bolsonaro.

According to reports, Israel will upgrade its Honduran consulate to a full-fledged embassy and provide Honduras help on cyber security, water and agriculture technology and law enforcement assistance. Israel will also open its market to Honduran coffee imports.

Israel and Honduras “agreed to pursue a plan of action, which includes meetings in their three respective capitals, to advance the process of the decision to open embassies in both Tegucigalpa and Jerusalem,” according to a joint statement from the three countries released by the U.S. State Department.

“The U.S., Israel and Honduras are uniting as Strategic Allies, committed to the development and security of their peoples,” Hernandez said in a tweet. “The alliance will have great results and positively impact the Honduran people.”

In connection with the meeting, Israel issued a statement noting that Guatemalan President Jimmy Morales and Sara Netanyahu, wife of Israel’s prime minister, discussed the advancement of a Honduran embassy in Jerusalem by phone when she was in Guatemala last month.

Guatemala and the United States are currently the only countries whose embassies are in Jerusalem. Brazil’s new president has also expressed interest in relocating its embassy there.

“Moving the Embassy is an overdue and common-sense decision,” he said. “Jerusalem is Israel’s undivided and eternal capital, and all branches of its government have been based there since 1950. Recognizing Jerusalem as Israel’s capital will advance the peace process, not obstruct it. True peace is only possible when all sides acknowledge the indelible bond between the Jewish People and their holiest city.”