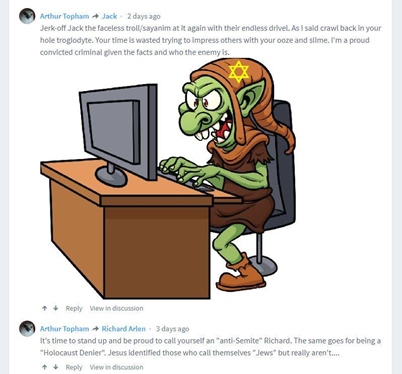 An antisemitic image posted to the internet by Arthur Topham

November 22, 2020
B'nai Brith Canada
QUESNEL, B.C. – Convicted B.C. hatemonger Arthur Topham has been sentenced to a 30-day conditional sentence plus three years probation, after failing to comply with the terms of his previous probation.

Friday's sentencing comes a month after Topham had been found guilty of breach of probation, following a prior conviction for wilfully promoting hatred against Jews in 2017.

His conditions include a ban on posting any online content related to Jewish people, the Jewish religion, Israel and Israelis, and/or Zionism.

Topham was first charged in 2012, after he had called for Jews to be forcibly sterilized, claimed that Canada is “controlled by the Zionist Jew lobby,” and described Jewish places of worship as “synagogues of Satan.” He was convicted by a jury in November of 2015.

Topham then launched a failed constitutional challenge to Canada’s hate speech laws, which delayed his sentencing until March of 2017. Though facing a maximum penalty of two years in prison, he received a mere six-month curfew and ban on posting online. B’nai Brith condemned this development at the time as a “mere slap on the wrist,” warning that it failed to establish a deterrent against future offences.

Topham was also ordered not to post “any information about persons of Jewish religion or ethnic origin” to the internet for a period of two years. He proceeded to violate this term of his probation by posting antisemitic material, leading to further charges earlier this year.

“This decision is a positive development in the fight against antisemitism and hate speech in Canada,” said Michael Mostyn, Chief Executive Officer of B’nai Brith Canada. “We need accountability for inciting hatred in this country, and Topham can now serve as an example to remind people that there are real consequences for these sorts of actions against your fellow citizens.”

Both Topham’s original conviction and his re-arrest for breach of probation were made possible through the work of Harry Abrams, a long-time B’nai Brith volunteer based in British Columbia.