Green Party of Canada members have received an email from one of their highest-ranking officials asking them to reconsider the party’s adoption of the anti-Israel boycott movement (BDS) at last Sunday’s convention in Ottawa.

The email, distributed Thursday afternoon and obtained by B’nai Brith Canada, is signed by Erich Jacoby-Hawkins, Co-Chair of the party’s Shadow Cabinet.

The email begins by noting that Jacoby-Hawkins himself and many other party members were unable to attend the convention, and that the BDS endorsement has attracted significant controversy. One of the strongest denunciations came from B’nai Brith.

It then asks members two questions: “What do you think about this decision?” and “Do you believe that there is a need to improve upon our current policy development process?”

The options provided to answer the first question state that the boycott resolution is either “acceptable as-is,” “should be repealed” or “should be made more general or applied more broadly (e.g. not tied to one actor or movement).” Answers to the second question are simply limited to “Yes,” “No” and “Unsure.”

This email comes on the heels of unfolding chaos within the Green Party, as a National Post story claimed that the party was “losing members [and] riding associations” in the aftermath of its divisive convention. Meanwhile, The Globe and Mail reported that Party Leader Elizabeth May was considering resigning her post due to her frustrations with the adoption of the anti-Israel boycott, describing it as “a flukey, weird set of circumstances that I think undermined our core values.” 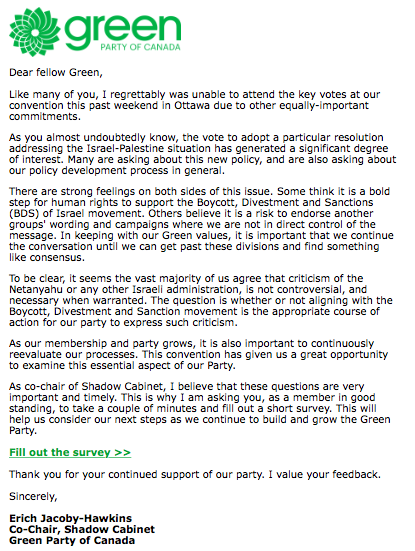