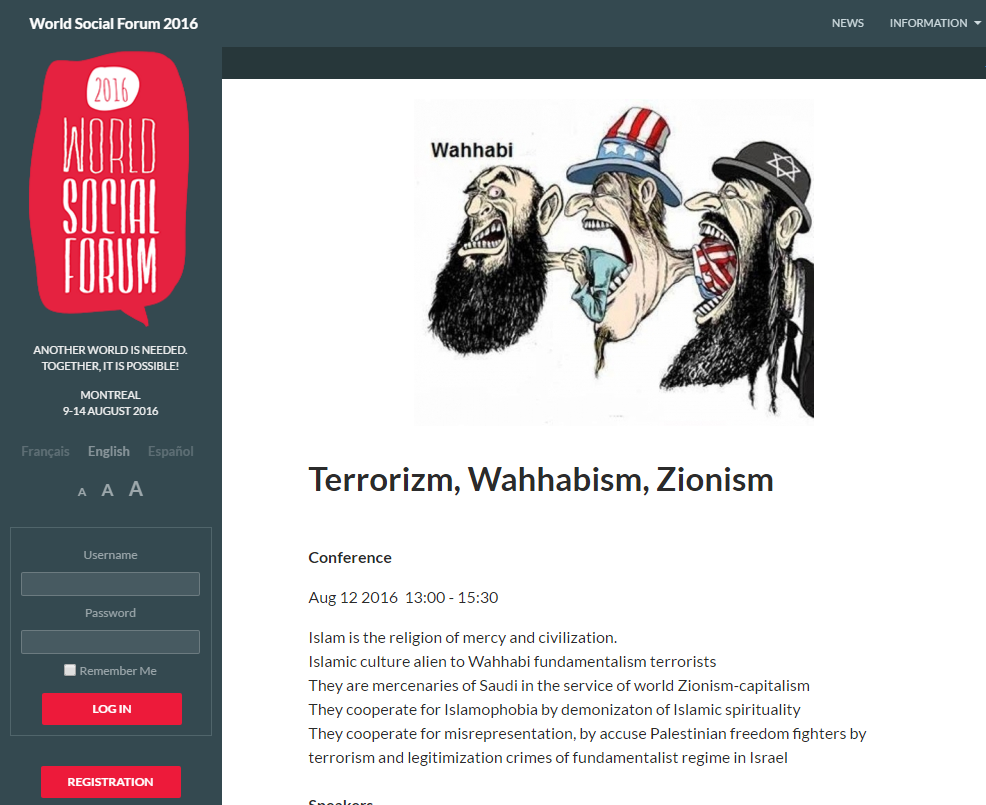 The World Social Forum (WSF), a government-partnered event set to take place in Montreal on Aug. 9 through 14, is promoting antisemitism and the anti-Israel boycott movement (BDS).

The WSF is an annual conference aimed at uniting various far-left and anti-globalization civil society groups. The “Partners” page on its website lists the Government of Canada, the Province of Quebec and the City of Montreal among its partners, along with McGill University, Université de Québec à Montréal and Cégep du Vieux Montréal.

As part of the WSF, a workshop entitled “Terrorizm [sic], Wahabbism, Zionism,” will be hosted by one Seyed Ali Mousavi on Aug. 12. The graphic for this event is a blatantly antisemitic caricature that depicts a Wahhabi terrorist emerging from the mouth of American mascot Uncle Sam, who in turn emerges from the mouth of a stereotypical ultra-Orthodox Jew with a Star of David emblazoned on his hat.

Other events being hosted under the WSF umbrella include a workshop headlined by Diana Ralph, a leading Canadian conspiracy theorist who has blamed Israel for staging the September 11, 2001 terrorist attacks. A few hours later, WSF attendees will hear from Sabine Freisinger, a former President of the Concordia Students Union who played a role in the violent 2002 riot which prevented Binyamin Netanyahu from speaking at that university. Rioters at Concordia physically assaulted a rabbi and his wife and kicked an elderly Holocaust survivor in the groin.

Most egregiously of all, on the “Our Commitments” page of its website, the WSF maintains a section called “Non Apartheid,” in which it states that “...we have already taken a stand to exclude all people, organizations and or activities that promote any kind of oppression, supporting the Palestinians and all the people struggling for emancipation and freedom”. This implies an outright ban on participation in the WSF by Israelis or by individuals who support Israel.

Overall, the WSF website lists at least a dozen workshops intended to promote the wholesale boycott of the State of Israel. In February, the House of Commons voted overwhelmingly to condemn BDS and “all attempts by Canadian organizations, groups and individuals to promote the BDS Movement, both at home and abroad”.

All calls made by B’nai Brith Canada to the Montreal organizers of the WSF have gone unreturned. B’nai Brith is in touch with the relevant government officials about this matter.