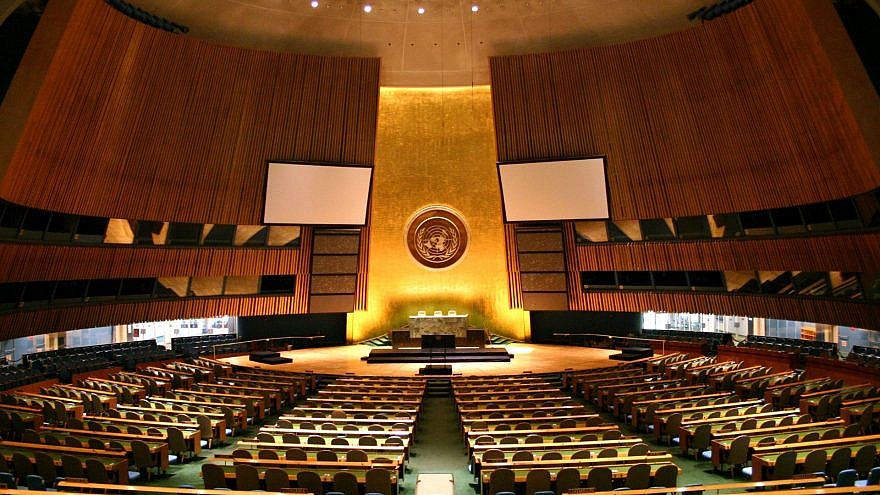 NEW YORK – The United Nations rejected a resolution on Thursday that required a two-thirds majority to pass condemning the terrorist group Hamas for launching rockets from Gaza into Israel in addition to its infrastructure such as building tunnels to infiltrate and attack the Jewish state.

The final vote was 86 in favour, 57 against, and 33 abstentions. Both Canada and the United States voted in favour of the resolution.

Although the vote was expected to pass through a simple majority, Kuwait proposed a motion to require a two-thirds majority to pass the resolution, dimming its chances for success. The motion was adopted with 75 votes in favour, 72 against, and 26 abstentions.

“The very fact that there is a vote against Hamas in the General Assembly is an achievement for Israel. We succeeded in creating discussion and enlisting support from around the world against this murderous terror organization,” said Israeli Ambassador to the United Nations Danny Danon. “This has never before happened at the UN, and now there has is an historic opportunity to condemn it publicly and decisively.”

By securing support from all of the European Union’s 28 member states, the resolution’s fate was all but sealed.

Danon told reporters on Tuesday that “we will get a majority, no matter what.”

In remarks just before what is one of her final acts as U.S. Ambassador to the United Nations Nikki Haley told her fellow members that the resolution could mark “a historic day” or just “another day.”

Additionally, Haley rhetorically asked: “Is the hatred that strong? Is the hatred against Israel that strong that you will defend a terrorist organization that does more harm to the Palestinian people? Isn’t it time to let it go?”

This development came on the heels of six anti-Israel resolutions adopted by the world body last Friday.

In a statement, B’nai Brith International President Charles O. Kaufman and CEO Daniel s. Mariaschin said, ”We salute the United States mission to the United Nations, and particularly Ambassador Nikki Haley, for initiating a first-time, explicit U.N. General Assembly (UNGA) repudiation of Hamas, the terrorist group that controls the Gaza Strip, for its culpability in relentless and recently escalated attacks against Israeli civilians from that territory and its reckless exploitation of Palestinians.”

They added: “Despite Hamas’s long history of targeting Israeli civilians with rockets, digging tunnels into Israel and carrying out suicide bombing attacks, this resolution was the first time that the UN General Assembly has almost condemned Hamas by name.”