Beyond the Ball: An Interview with B’nai Brith Sportsman David Catzman 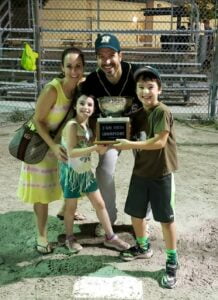 David Catzman has played in B’nai Brith Canada’s sports leagues for nearly 20 years and is the longtime manager of the Nomads basketball team. A family and community man to the core, he often brings his kids out to the diamond and the court to watch the games.

B’nai Brith sat down with David to discuss his many years playing in our sports leagues and the special significance the Nomads franchise holds for him.

How did you get involved with B’nai Brith sports?

I first got involved in the summer of 2006. My friends and I were looking for a reason to see each other more frequently, so we created a baseball team called the Nomads. We didn’t know it at the time, but nearly 20 years later, at least half of that team is still on the roster today. We’ve all gone through a lot together since then – we’ve had girlfriends who became wives, and we had children who now come out to watch the games, and who hopefully will one day take over the franchise in the spirit of bringing their friends together.

In 2008, we started a basketball team as a way to keep playing during the winter months. That brought in a whole new roster of Nomads, many of whom didn’t originally know each other but have since become good friends.

Why is it significant to you?

The Nomads franchise has meant so much to me, firstly because it’s kept me active. And secondly, it serves as an example for my children about competition, athleticism, leadership and camaraderie. I can tell them that it’s important to be a gracious winner, a good loser, to work as a team and to have a good attitude, but to be able to show them through my actions on the field or on the court is so much more meaningful and impactful.

In addition to being a player, you’re also a manager. What does that entail?

It’s more of an organizational role: I make sure we have enough players for every game, that the roster is completed, and that everyone pays their dues. But I also get to be the one who makes sure the season happens and the tradition continues.

Is there one standout highlight from your time playing in B’nai Brith’s sports leagues?

There are actually two.

First, we’ve won 9 championships over the years: five in basketball and four in baseball. It’s particularly special to have those celebrations when we’re 25 and then again when we’re 40. You fail more often than you succeed, which makes the successes that much more meaningful.

The second was in the summer of 2007. We won our first championship, and I was named MVP. It was about 10 weeks after my father passed away. It sounds silly to say that house league softball could help you get past a traumatic event like that, but it was the conduit that allowed my friends to rally around me, keep me busy and get me through it.

You sound like you have a great group of friends.

I’m very lucky. It’s kind of a chicken and egg situation. Our friendship got us involved in the sports, but it’s the sports that has kept us so close all these years.