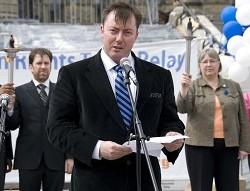 In recent months, clearer evidence has emerged of the construction of internment camps holding up to one million people, being used to forcibly confine and abuse Uyghur prisoners. Most detained Uyghurs have not been charged with any crimes and they have no access to lawyers.

China’s denial of these events is not credible.

For Jews around the world, such events have a terrible resonance and provide a moral imperative to speak out. That is why B'nai Brith Canada has been drawing attention to this issue for many years, and will continue to do so until China's human rights abuses end.

"We are calling on all international human rights organizations to unequivocally condemn the mistreatment of the Uyghurs and to join us in making this issue a pivotal part of our campaigning," said Michael Mostyn, Chief Executive Officer of B'nai Brith Canada. "We also call on the Government of Canada to condemn China’s conduct in the strongest possible terms, and to use all available means to help bring it to an end."

"China is committing full-scale ethnic genocide against Uyghurs and targeting our distinct identity through vast networks of concentration camps, torture and death chambers," said Dolkun Isa, President of the World Uyghur Congress. "We are very grateful that B'nai Brith Canada and the global Jewish community, victims of genocide themselves in the past century, are standing in solidarity with Uyghurs in the face of evil."

"A 21st century ethnic genocide is unfolding right before our eyes, and the silence of many nations around the world is shocking the conscience of human civilization," added Mehmet Tohti, Executive Director of the Uyghur Rights Advocacy Project, Canada. "The time for verbal expression of concern is over. Now, we need action to fulfill our promise of Never Again."

In a recent statement, religious leaders and leaders of faith communities came together to affirm human dignity for all by highlighting what is happening in China as an egregious human tragedy, one of the most significant since the Holocaust.

In a similar vein, Canada and a number of like-minded countries have called for action at the United Nations Human Rights Council, expressing concern about arbitrary detention, widespread surveillance and restrictions – particularly targeting Uyghurs and other minorities in Xinjiang. These deep concerns have been reinforced by additional information now in the public domain. Canada and its partners have urged China to allow the UN High Commissioner for Human Rights meaningful access to Xinjiang at the earliest opportunity.

The Government of Canada must press Chinese authorities for complete and unfettered access to Xinjiang by the United Nations, must call for a detailed and unfiltered report on the condition of the Uyghurs, must condemn Chinese persecution of the Uyghurs and other minorities, particularly Muslims, and must continue to speak out at the United Nations and plead for concerted international efforts to protect the persecuted Uyghur population from the hands of the Chinese regime.

B’nai Brith also calls on the government of Canada to use its Magnitsky legislation, passed in 2017, to sanction key officials of the Chinese government implicated in human rights violations involving the Uyghur community. The legislation applies to authorities in any country complicit in “gross violations” of human rights or corruption. The legislation allows the government to freeze assets here belonging to the listed individuals, bar them from the country and prohibit Canadians from doing business with them.

B’nai Brith renews its call for the release of Canadian Huseyin Celil, who was abducted by the Chinese government in Uzbekistan in 2006. Celil is a Canadian citizen and a Uyghur human rights activist from China who promoted the rights of China’s Uyghur minority. In 2001, he fled China after being jailed for supporting the religious and political rights of the Uyghur people. The United Nations recognized him as a refugee.

B'nai Brith Canada will never be silent in the face of injustice and persecution — no matter whom it targets.