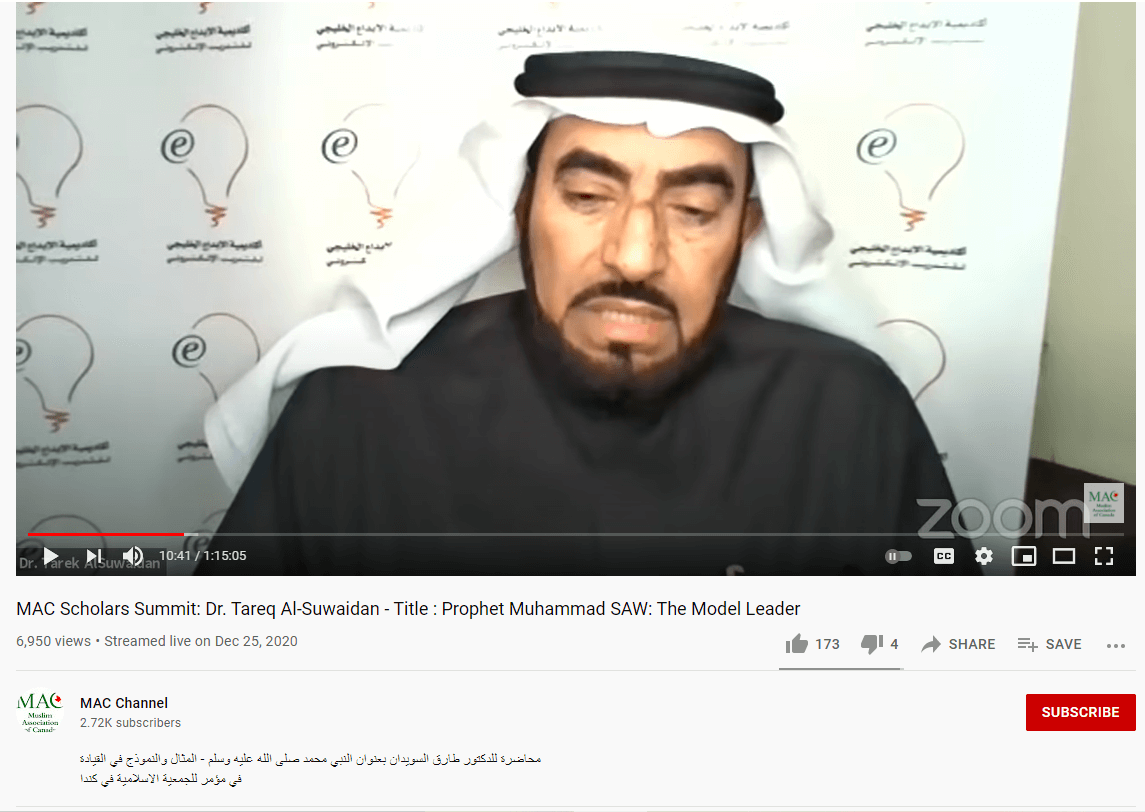 Tareq al-Suwaidan delivers a leadership lecture for the Muslim Association of Canada (MAC) on Dec. 25, 2020

TORONTO – B’nai Brith Canada is demanding that the Canada Revenue Agency (CRA) revoke the status of a group that twice invited a notorious Jew-hater to address its membership.

Tareq al-Suwaidan, an Islamist activist from Kuwait whose history of antisemitic remarks was flagged by the Centre for Israel and Jewish Affairs (CIJA) last week, had been scheduled to address the Muslim Student Leadership Conference, hosted over the weekend by the Muslim Association of Canada (MAC), one of the country’s largest Islamic charities. The MAC also hosted a lecture on leadership by al-Suwaidan in December of 2020.

In response, MAC denied any wrongdoing, suggesting dubiously that the Arabic translations offered were inadequate, or that al-Suwaidan had recently changed his views and no longer opposed Judaism as a religion, but rather just to Zionism.

However, B’nai Brith has unearthed additional material proving that al-Suwaidan maintains his extreme, antisemitic views. In fact, as recently as May of this year, he praised the Hamas terror group and expressed his belief that the Muslims would conquer Rome in an al-Jazeera interview. He also used the words “Jew” and “Zionist” interchangeably, referring to the victims of April’s Meron disaster as “Zionists,” even though some of them were not Israeli or were even members of anti-Zionist groups.

In a sermon posted in 2019 to his YouTube channel with over 55,000 views, al-Suwaidan alleges that Judaism teaches its followers “how to manipulate and cheat G-d,” that “Jews are permitted to rape non-believing women” and that “Jews must kill those non-Jews whom they can manage.” He is also the author of an infamous “Jewish Encyclopedia” designed to inform readers about Jewish “wickedness, treason and deception.”

“The continued misuse of charitable funds to portray notorious Jew-haters as admirable ‘leaders’ is unacceptable,” said Michael Mostyn, Chief Executive Officer of B’nai Brith Canada. “The Canadian Muslim community, as well as the CRA, must understand that the Jewish community speaks with one voice on this issue.

“If the Government of Canada is serious about cracking down on antisemitism, as discussed at this month’s Summit, it must take action in this matter.”

B’nai Brith Canada has written to the CRA and Diane Lebouthillier, the Minister of National Revenue, demanding that the MAC’s charitable status be revoked unless it issues a full and unequivocal apology for its invitations to al-Suwaidan and promises not to associate with him ever again.

Ironically, some Canadian Muslim groups have recently claimed that their charities are unfairly targeted by the CRA, and Minister Lebouthillier requested that the Taxpayers’ Ombudsperson investigate these claims last week. To the contrary, it is B’nai Brith’s view that the CRA has a duty and expectation to enforce Canada’s charity laws by conducting audits uniformly against any charity found violating their core charitable principles, regardless of the background or community involved.