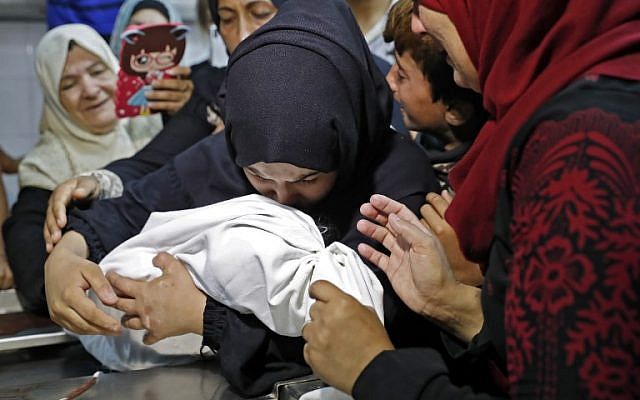 Yet, despite a massive development, major Canadian news outlets like the Toronto Star, National Post or CBC have yet to issue a follow-up, leaving their readers to believe a falsified version of the story they originally reported.

A case in point is an online article by CBC’s Jerusalem correspondent, Derek Stoffel, which ran with the headline, “Gaza images stir emotions but fail to capture complexity of Israeli-Palestinian conflict.”

The “images” refer to the photos of Layla Ghandour, who was purported to have died from tear gas inhalation on May 14.

Stoffel reported that several news organizations cast doubt upon the story and even quoted Times of Israel editor David Horovitz as saying, “Now, more than ever, the complexity of the Israeli-Palestinian conflict demands journalists be accurate.”

In my view, the conflict demands that journalists not only be accurate, but thorough. In other words, they have to know their environment and, if they don't, they have to learn it and keep digging until they get the whole story.

However, in this instance it appears neither the correspondent nor the network did any due diligence, with both ignoring the most important part of the story.

Weeks ago, the Israel Defence Forces revealed they had captured three members of the al-Aqsa Martyrs' Brigade (a Fatah organization) who were trying to infiltrate the border, carrying weapons and a video camera.

One of them, 20-year-old Mahmoud Omar, revealed during interrogation that he is related to the Ghandour family. As a family member, he learned that Hamas' military chief, Yahya Sinwar, had offered Layla's parents NIS 8,000 (about $2,900 Cdn) to tell the media that Israel was to blame for Layla's death.

In actuality, Omar learned, the baby died of a congenital blood disorder.

Remember Layla Ghandour that her parents said she died after inhaling tear gas that the IDF has fired at the #Gaza border?

Her cousin admits she died of hereditary blood disease & reveals that #Hamas paid her parents 8000 NIS so they would lie & blame #Israel. pic.twitter.com/n3HapGNH8f

This is a massively significant development to the story. Even the Gaza Health Ministry has since removed Layla from its border clash death toll.

However, months later, there's been no CBC update to either Stoffel's story or any other story on Layla Ghandour.

Not only did CBC neglect to post an update, it didn't ask the questions that should give pause for reflection, like this one:

There are about 220,000 families in Gaza with children under the age of 14. How did Yahya Sinwar find this one family with an infant on the brink of death, just in time to have her body appear on Al-Jazeera's split screen with the opening of the U.S. Embassy in Jerusalem?

The most likely answer is that he never had to leave his office building. The most seriously ill children in Gaza are hospitalized in the al-Shifa Hospital. Not coincidentally, the Hamas command central is in the sub-basement of that hospital. A press of a button on the hospital’s elevator is all he needed.

Another question springs to mind.

Would the doctors at al-Shifa release Layla Ghandour knowing she could easily die if taken to the border? In other words, would they have brazenly violated their own Hippocratic Oath?

These questions lead to the conclusion Sinwar went looking for the parents of an infant who had already died, and promised them the equivalent of six months' salary to blame Israel in front of the cameras. This isn't even a new tactic. It's roughly the same one used to raise the demonization of Israel to a peak: the Mohammad al-Dura story.

But will the revelations of Mahmoud Omar stop the blood libel in its tracks?

Not if CBC ignores those revelations.

To be sure, many others in the mainstream media have also ignored these revelations. So why focus on CBC? Well, for one, we pay for it – at a tune of $1.35 billion annually. And we have every right to hold it to account.

Josh Korn is a researcher, software architect and builder of children's sports organizations. His family roots date back to the early days of the Kibbutz and Moshav movements. He is also one of about 140 people who owe their lives to five individuals honoured as Righteous Among the Nations in November of 2017.