Canadian Pro-Palestinian Agency Offers Only One Side of the Story

Last month, Beit Zatoun – a pro-Palestinian organization based out of Toronto – sent out its monthly newsletter with the subject line, “Fifty years of Occupation is No Celebration.”

Sent conspicuously one week after the anniversary of the Six-Day War, the newsletter offers readers “some of the best articles and perspectives on the event and its disastrous aftermath for everyone (on the planet) except the most dogmatic and insensate,” implying that anyone who believes that the State of Israel has the right to exist is both “dogmatic” and “insensate.”

It also argues in favour of looking at the Arab-Israeli conflict “not strictly as a historical problem needing resolution, but as a terrible and festering wound needing healing.” Beit Zatoun “is pleased to serve as it can in the struggle to bring healing to a deadly wound in the body of the world,” the newsletter concludes.

There can be no denying that “healing” is called for in the Middle East so in that sense, Beit Zatoun, which received a glowing profile in the CBC when it announced it was shutting its doors last year, isn’t wrong. Unfortunately, its views are both misguided and overwhelmingly biased.

Among the perspectives it offers on the Six-Day War, Beit Zatoun chose to include “A 50-Year Occupation: Israel’s Six-Day War Started With a Lie,” “Israel’s Occupation Was a Plan Fulfilled,” “Fifty Years, Fifty Lies,” and perhaps most inflammatory, “Israel provoked the Six-Day War in 1967 and It Was Not Fighting for Survival.”

According to Beit Zatoun, the “best perspectives” on the war are those that assign sole responsibility to Israel (there is no mention of how the ongoing efforts of Hamas and the Palestinian Authority are to the detriment of Palestinian civilians) and even claim that the most widely-accepted narrative of the Six-Day War’s events is entirely fabricated.

For example, the first article listed – Mehdi Hasan’s “A 50-Year Occupation” – states: “Genocide, went the argument, had been prevented; another Holocaust of the Jews averted. There is, however, a problem with this argument: it is complete fiction, a self-serving fantasy constructed after the event to justify a war of aggression and conquest.” So, basically, it’s an article where the author engages in Holocaust denial and promotes the notion that the Third Reich in reality did not murder six million Jews and millions others between 1939 and 1945. 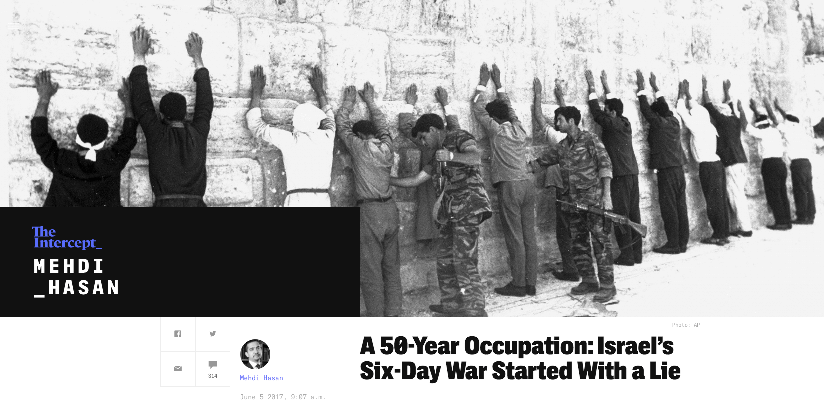 Another article, published on Mondoweiss by James North, cites the work of controversial scholar Norman Finkelstein, arguing that, “Finkelstein emphasizes that no genuine academic today, whatever their political orientation, endorses the Mainstream Narrative… [Finkelstein] argues that the facts show that Israel was not peacefully minding its own business, but instead regularly and violently provoking its Arab neighbours.”

Indeed, the articles shared by Beit Zatoun attempt to offer a black-and-white perspective of the war in which Israel is the “bad guy” who initiated an unprovoked war of aggression. It does not offer a single article that presents a balanced and objective view of the Arab-Israeli conflict.

In his article, Hasan cites a former Israeli general’s statement that Israel was in no immediate danger when its Arab neighbours were mobilizing their armies. He does not present a rebuttal to the general’s claims. Is it not the obligation of the author, though, to do so? Or, at least, to list if the general had any motivations, political or otherwise? Is it not irresponsible for a supposed journalist to accept such a controversial statement at face value without digging any deeper?

In the age of biased and overtly partisan reporting, journalists should be double- and triple-checking their facts before publishing, so that they don’t contribute to the world of “alternative facts.”

And, if Beit Zatoun is indeed committed to “bringing peace and justice” to Palestinians, would that not entail demanding justice of the Palestinian leaders who use humanitarian aid to build terror tunnels? Or the leaders who live in $13-million mansions while their own people live in squalor? Or the leaders who engage in actual child abuse by inciting youth to become indiscriminate murderers? Should condemning such actions not also be part of Beit Zatoun’s mandate to bring peace and justice to Palestinian civilians?

“So much of the current rhetoric about Israel relies on painting the Arab world as the victims, as the David to Israel’s Goliath,” explains Amanda Hohmann, the National Director of B’nai Brith Canada’s League for Human Rights. “The reality of the Six-Day War does not support that narrative, so of course it needs to be reframed to paint Israel as the aggressor and the Arab world as the victims of Israel’s expansionist agenda.”

And it is precisely this agenda that Finkelstein – and in citing him unquestioningly, North – promotes in his work. During an interview with Dr. Howard Tzvi Adelman, a professor of Jewish history at Queen’s University, he tells me: “It is a simplistic narrative that contains not only too many statements of presumed facts and truths, but also counterfactuals: ‘Israel could have… which would have…’

“The tendentious narrative here about the ’67 war seems to point to the idea that Israel’s security was not at risk and that she provoked the war(s) to gain territory. From my reading of the historical literature, there is no consensus on this view. The problem with the Finkelstein narrative is that it tries to present one in a very un-nuanced way.” 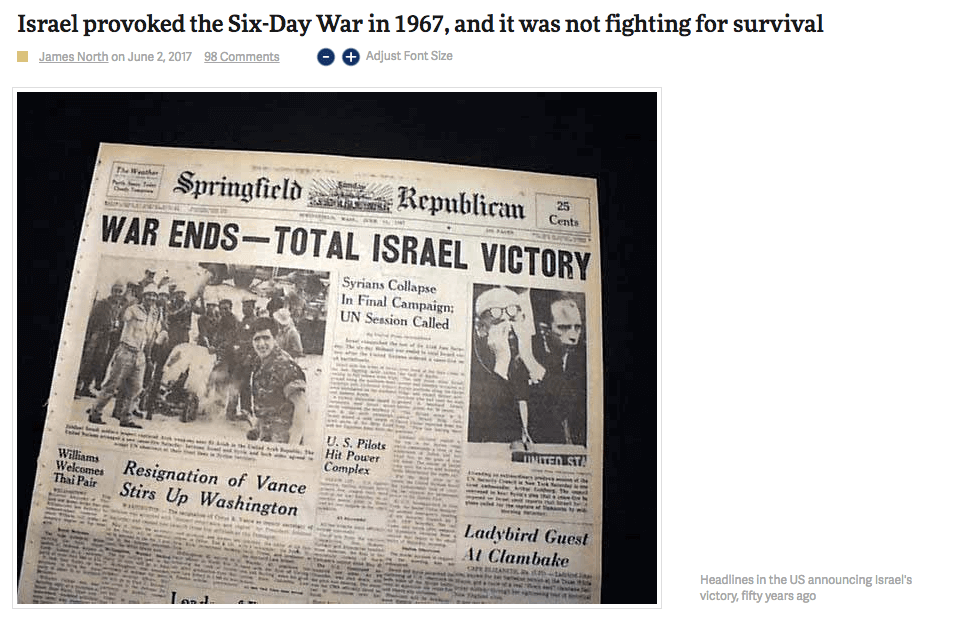 If Beit Zatoun’s mandate is to support Palestinians, it has two choices. It can go the way of Palestinian leaders and offer subjective and overwhelmingly anti-Israel materials in a bid to further divide two peoples against one another, OR it could offer materials that are objective in its reporting of the conflict and actually promote the path to dialogue – and subsequently – of peace.

History, of course, is complex and subject to interpretation. To knowingly bend the truth or present merely one side of an argument to promote a political agenda is simply irresponsible, and doesn’t factually convey the events surrounding the Six-Day War. As Hohmann says, “It’s not surprising that Beit Zatoun has chosen to use the anniversary of one of the most decisive moments in the modern history of Israel to try to undermine the legitimacy and credibility of the Jewish state. The narrative of her detractors relies on reducing Israel’s stature in the eyes of the world.”

But sometimes there is a reason that the world has accepted as fact a certain interpretation. Just as few would disagree with the fact that Hitler was responsible for the Holocaust, or that George W. Bush initiated the Iraq War, the facts of the Six-Day War point quite clearly to Israel acting out of defence.

Ultimately, Beit Zatoun’s pushing of the Israel-as-aggressor view of the Six-Day War fits into a disappointing pattern of Israel’s and Judaism’s detractors trying to rewrite Jewish history – Holocaust deniers and revisionists are of course the worst culprits of this phenomenon, but are by no means alone.

Not only are such attempts at revising history to suit a political agenda problematic academically, they can also be dangerous. “Those who are not educated on the reality of the conflict can be easily influenced by this false narrative,” says Hohmann. “Given that the Arab-Israeli conflict continues to this day, and they continue to fight a war of emotion and propaganda, it is of course dangerous any time someone spreads falsehoods about Israel and her motives or actions. We are fighting a war for the hearts and minds of those in the West.”