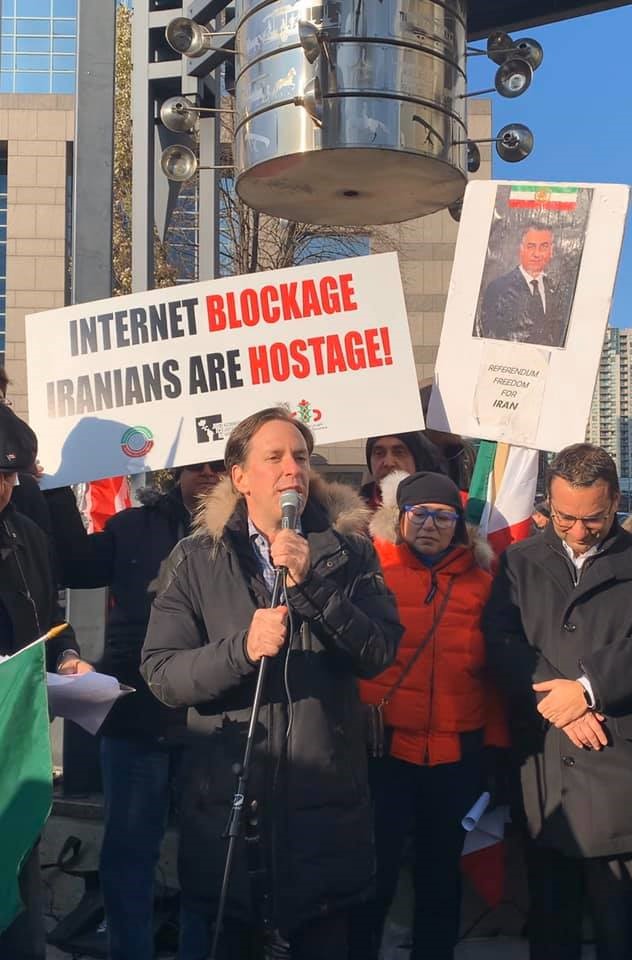 TORONTO – More than 300 Torontonians came out to the city's Mel Lastman Square on Sunday to protest the Iranian regime's ongoing brutality against its own citizens.

The attendees included members of both the Iranian and Jewish communities, as well as Canadians of all backgrounds who wanted to make their voices heard on this important issue. Solidarity for a Democratic Iran, Council of Iranian Canadians, Justice 88 and B’nai Brith Canada co-hosted this public rally, which included expressions of support by MP Michael Levitt, MP Ali Ehsassi, MPP Robin Martin, Justice 88 Chair Reza Banai and B'nai Brith CEO Michael Mostyn.

"The Jewish community proudly stands with its Iranian brothers and sisters, who are being denied their basic rights and freedoms while being severely repressed by this dictatorial regime," Mostyn said. "The tyrannical Iranian regime poses a serious danger to both of our communities, and it is important that we always stand shoulder to shoulder in solidarity."

"We will not be silent as the Iranian regime tramples on the human rights of protesters," said Levitt, Member of Parliament for York Centre. "We stand with [the] brave women and men who have taken to the streets to have their voices heard. Canadians support their calls for freedom and democracy [and] an end to brutality and repression."

"My thoughts are with the courageous protesters throughout Iran undeterred by the brutal government crackdown," said Ehsassi, Member of Parliament for Willowdale. "Nowhere else in the world would protests against soaring fuel prices lead to dozens being killed and the wholesale arrest of over a thousand protesters by a regime."

"It is of utmost importance that the Iranian regime understands that the world is taking notice of what it is doing," said Martin, Member of Provincial Parliament for Eglinton-Lawrence. "The people of Toronto have made their voices loud and clear - the suppression of human rights in Iran is unacceptable."

"The Islamic regime in Iran tripled the gas prices in Iran in order to blame it on US sanctions. The brave Iranians came to the streets of over 100 cities and peacefully blamed the regime for misuse of the nation's resources in proxy wars," Banai said. "The terrorist regime has shut down the internet to prevent the outside world from seeing all its atrocities. We need to raise our voices for the voiceless to prevent a bloodbath by the Iranian regime."