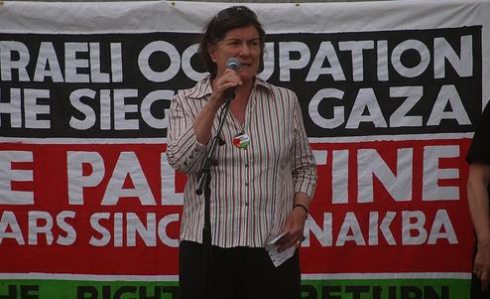 A life peer (high ranked politician) in the United Kingdom claims that Israel's treatment of Palestinians is a "major cause" of ISIS and the rise of Islamist terrorism.

Baroness Jenny Tonge, a Liberal Democrat, said in the House of Lords that Israel is "creating a generation of terrorists who will have a justified grudge against Israel and the countries who support her."

The Baroness denied that the Palestinian Authority tells children to throw sticks and rocks at Israeli soldiers.

"The children of Palestine do not need to be told to react against what is happening to them," she said.

Tonge claimed that Israel's 'mistreatment' of Palestinians justifies the use of violence and terror by Palestinians. Tonge is a big supporter of the Boycott and Sanctions movement against Israel and has a long history of justifying terrorism. She's gone so far to comment on suicide bombers, "If I had to live in that situation - and I say that advisedly - I might just consider becoming one myself."

Shameful comments by Baroness "Israel is not going to be there forever" Tonge in House of Lords just now... pic.twitter.com/65O1lRiVbM

Tonge's comments have resulted in many calls for expulsion; Johnathon Sacredoti, a director of Campaign Against Antisemitism, said

"Baroness Tonge has yet again offended Jewish Britons… Having previously suggested an investigation into supposed Israeli organ harvesting which is the modern-day incarnation of the mediaeval antisemitic blood libel… By suggesting there would be Palestinian terrorists 'with a justified grudge' against Israel, she is effectively justifying the terrorism that is aimed at Jewish people in Israel and around the world by Hamas and other terrorist organisations… We cannot expect her to apologise, as she means it, and has a long history of antisemitism which has seen her forced to resign from the Parliamentary Liberal Democrat Party… It is now time for her to be expelled from the Liberal Democrat Party entirely, and from the House of Lords."

In 2012, the Baroness was expelled from the Liberal Democratic party. The party, which is pro-Palestine, revoked her membership for her radical, anti-Israel remarks at a conference held in Middlesex University earlier that year. At the conference she said:

"Beware Israel. Israel is not going to be there forever in its present form. One day, the United States of America will get sick of giving £70bn a year to Israel to support what I call America's aircraft carrier in the Middle East – that is Israel. One day, the American people are going to say to the Israel lobby in the USA: enough is enough. Israel will lose support and then they will reap what they have sown."

She refused to apologize for her inflammatory remarks which incited hatred and violence directed towards Israel. Since then she was an independent Baroness but later phased back into the Liberal Democratic party.

Vice President of the Board of Deputies of British Jews, Marie van der Zyl, commented on Tonge's remarks saying, "another outrageous speech from Baroness Tonge on the Middle East. It is time for Liberal Democrat Leader Tim Farron to expel her once and for all from the party.”

Lord Stuart Polak (Conservative) came to Israel's defence in the debate and chastised the Palestinian Authority.

"In the West Bank, it is the Palestinian Authority that must stop polluting the minds of youngsters through its campaign of radicalisation," said Lord Polak. "Any leadership that encourages children to take a knife and kill another child purely because of their religion or race would be deemed despicable."