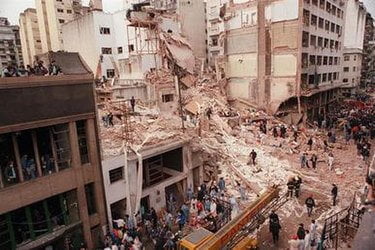 OTTAWA – B’nai Brith Canada has appealed to the Government of Canada to use the “Justice for Victims of Corrupt Foreign Officials Act” to list the five Iranians who are on the Interpol Red Notice ledger as suspects in the 1994 bombing of the Jewish Community Centre (AMIA) in Buenos Aires, Argentina.

The Justice for Victims of Corrupt Foreign Officials Act enables Canada to restrict dealings in property and freeze the assets of those listed. The bombing widely perceived as carried out by Hezbollah – a proxy of Iran’s Islamic Revolutionary Guards Corps (IRGC) – led to 85 deaths and more than 300 injured. None of the perpetrators have yet to be brought to justice.

On July 18, B’nai Brith joined other Jewish organizations and members of the diplomatic corps at a solemn ceremony at the Embassy of Argentina to commemorate the 28th anniversary of the massacre.

Josefina Martinez Gramuglia Argentinian Ambassador to Canada, said at the ceremony that we must never forget those killed and injured in this reprehensible act of terror. She called for the quest for justice to continue and for the perpetrators to be arrested. She outlined the role of Iran and Hezbollah in carrying out the bombing and noted that without effective international pressure, Iran would continue to shield those responsible from prosecution.

“In addition to freezing their assets and outlawing any dealings with them, the Justice for Victims of Corrupt Foreign Officials Act bars gross human-rights abusers from entering Canada,” said Marvin Rotrand, National Director of B’nai Brith’s League for Human Rights. “The regulation under the law already lists culprits who are nationals of Venezuela, South Sudan, Myanmar, Russia and Saudi Arabia, yet none is listed from Iran.”

B’nai Brith believes that, even if enacted, these measures alone are not sufficient to dissuade Iran from its terrorist activities. As a result, B’nai Brith has formally asked the Government to follow our allies, including the United States and the United Kingdom, in listing the IRGC as a terrorist entity.

“The House of Commons in June, 2018 passed a motion overwhelmingly calling on the Government to list the IRGC as a terrorist entity.  Yet, more than four years later, it has still not happened,” said Michael Mostyn, B’nai Brith Canada’s Chief Executive Officer. “It is impossible to understand this unreasonable delay, which is why B’nai Brith continues to pursue this national security issue before the courts.”

Recently, a Canadian court ruled that the shooting down of Ukraine Airlines flight PS-752 resulting in the death of 176 passengers and crew, including 65 Canadian citizens and 30 others who were permanent Canadian residents, was a deliberate act of terrorism carried out by the IRGC.

Two months ago, the international community condemned the IRGC for the hijacking of two Greek oil tankers in an act of piracy. The IRGC was recently condemned by Turkey and Egypt for plotting to murder Israeli tourists visiting those countries. The IRGC is further connected to the efforts of Iran to skirt international sanctions in order to create a nuclear weapon.