“Do Israelis even have their own food? Cause all they do is steal and reclaim.”

These are real comments you will find on BlogTO’s Facebook post advertising Aish Tanoor, a kosher Israeli restaurant in midtown Toronto. BlogTO’s editors are likely shooting themselves in the foot after realizing they used – at least to anti-Zionists and antisemites – the most offensive and despicable word in any written language: Israel.

In describing the seemingly innocuous video of Aish Tanoor, one of literally hundreds of similar food-themed clips the Toronto media outlet has released over the past year, BlogTO wrote, “This might be the best Israeli food in Toronto.” In doing so, it unknowingly opened the floodgates to every Israel hater in town, with dozens of comments (maybe more, as it appears BlogTO has removed most of the offensive ones) charging Israel of cultural theft, appropriation, apartheid, genocide, and terrorism.

“WOW BlogTO this is downright embarrassing and massively disappointing!” wrote one angry commenter. “How could you participate in the oppression of millions of Palestinians by advertising this as Israeli food? Are you totally unaware of the massive war crimes committed by the Israeli state?? Are you unaware that Israel is an apartheid state?? I’m just speechless at your ignorance and total lack of social awareness in this day and age. Absolutely shameful.”

“Nothing in this video is Israeli!” claimed another. “These are all Middle Eastern classic foods. This a pure form of ethnic cleansing, to remove a culture’s food from their history.” 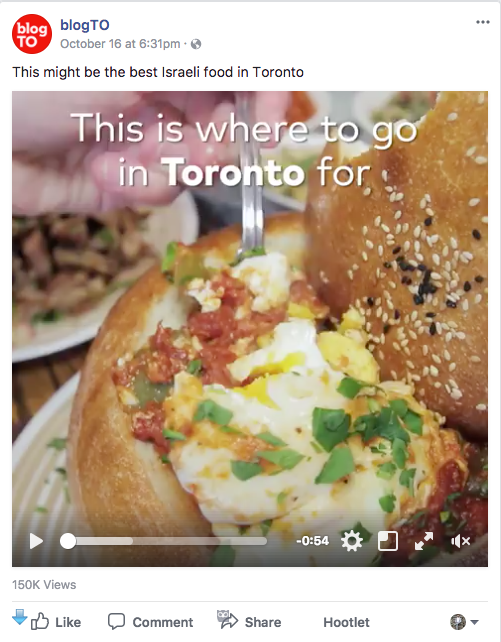 When accused of antisemitism, several commenters immediately responded that they aren’t antisemitic at all (many played the “I’m a Semite too” card), saying instead that they’re critical of Israeli political policy – though, what Israeli policy has to do with hummus and grilled lamb we're not entirely certain.

To those, we say reasonably, objectively and truthfully: you are wrong.

To all of you who don’t take the time to understand why so many experts – including Pope Francis, Emmanuel Macron, Tony Blair, Alan Dershowitz, and Ronald Lauder – agree that anti-Zionism is most certainly the new antisemitism, we ask that you please hear us out.

Regardless of your stance on the Arab-Israeli conflict, settlements in the West Bank (known historically as Judea and Samaria), or Benjamin Netanyahu, let’s start at least by agreeing that the Jewish people do not hail originally from Poland, Ukraine, Russia, Germany, or France. This should not be a matter of public debate, as genetic evidence confirms that all Jews, even Ashkenazis, are descendants of the Middle East.

This is why Jerusalem, our eternal capital, is mentioned in the Tanakh some 699 times. This is why we chant “Next year in Jerusalem” at Passover. This is why Jews in the Diaspora pray facing east. Jerusalem is the site of our Holy Temple, and the centre of where we as a people achieved our cultural genesis. Given that the teachings of Christianity and Islam were in part built on the foundation of Judaism (one of the world’s oldest monotheistic religions), to dispute that the Jewish people come from the Middle East is to dispute all of these religions. You can’t have your hummus and eat it too.

That’s why comments like “It’s not Israeli food at all, not even related,” are false. Of course it’s related.

The same goes for antisemitism and anti-Zionism.

When anti-Zionists Semites write with whimsy, “You mean Palestinian food? Is that a typo?” about food they say is Middle Eastern and not Israeli, they are disputing that the Jewish people have had a presence in the Middle East longer than both Christians and Muslims. Throughout the mid-20th century, nearly one million Jewish refugees from countries like Syria, Iraq, Algeria, Egypt and Iran fled their homes due to rising persecution and found a home in Israel. Millions of Jews living in Israel today have always lived on the very spot that they're in and across the Middle East, and many of these Jewish refugees brought recipes with them to Israel to continue the culinary traditions of their ancestors.

Antisemites seem to believe that, because many Jews today appear to be of European descent, they aren’t indigenous to Israel. That is false. If the Romans and the Arabs didn’t conquer us and if we weren’t kicked out of the land that was rightfully ours, we always would have been in Israel. We always would have been Middle Eastern.

Zionism – not an ugly word, by the way – is the belief that the Jewish people deserve a homeland, just as Muslims and Christians deserve a homeland. To be a Zionist is not akin to being anti-Palestinian. In fact, before the 1960s, it was only Jews who even identified as Palestinian. Zionism doesn't mean, "Hey, let's steal other people's land and culture." No, Zionism means that the Jews deserve self-determination on their ancestral lands.

Attacking Zionism as racist or colonial is antisemitic. Why? Because it completely ignores the facts, that the walls and barriers are there for security purposes, and that Palestinian-Arabs have indiscriminately murdered (and sought to murder) Jewish-Israelis for decades. No activist in support of boycott, divestment and sanctions (BDS) levels the same criticism at Hamas as they do at Israel. No BDS supporter mentions that the Israeli government, on several occasions, offered the Palestinians a state and were refused each time. No alleged "pro-Palestinian" admits the apartheid that exists not just in the West Bank and Gaza, but in Arab countries around the world that actually have different sets of laws for different peoples. There are no Jews in the vast Arab world, yet there are 1.5 million Arab-Israelis with full and equal rights.

The goal of Zionism is not to create a “settler-colonial state” over occupied lands. Its goal is for the Jews to return home. Theodor Herzl and Chaim Weizmann may have founded the concept of political Zionism, but the belief that Jews will one day return to the land of Israel has existed from the very beginning of our religion.

To the commenters who wrote, “They stole the land already!! Stealing culture and food will never be a problem for them… thieves will be always thieves,” or “You stole the land. Now your stealing the food and culture. Typical,” you are not attacking Israelis. This is not anti-Zionism or political advocacy. This is antisemitism through and through. You’re using antisemitic tropes from the Middle Ages and perpetuating a false and offensive narrative. Jews have always been in the Middle East and they’ve been cooking Middle Eastern foods for as long as anyone else.

Daniel Koren is the Media Coordinator at B'nai Brith Canada, and formerly the Online Editor of both Shalom Life and The CJN. He has written extensively on issues pertaining to Jewish culture and the Arab-Israeli conflict.