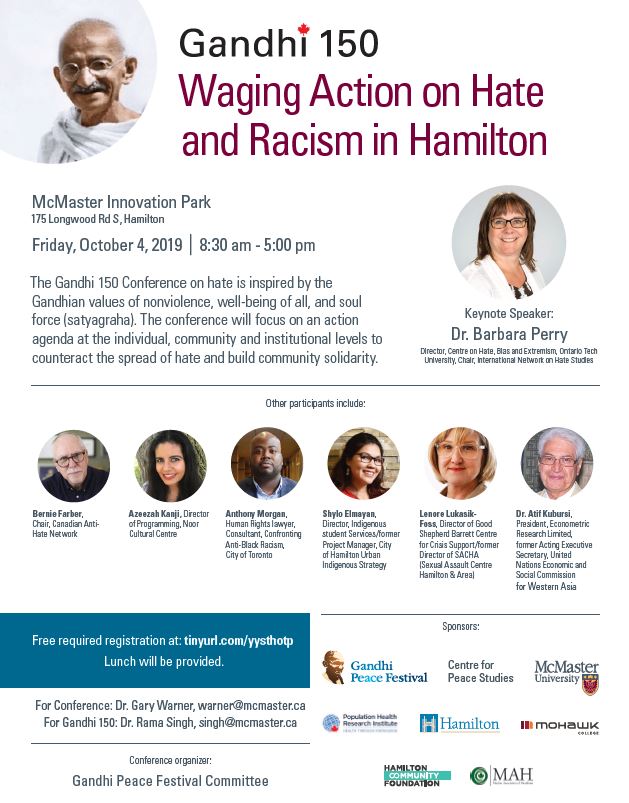 A poster for the conference (Eventbrite)

HAMILTON – B'nai Brith Canada is disappointed by a local university's refusal to remove a pair of anti-Israel speakers from its lineup for a conference Friday.

Azeezah Kanji and Atif Kubursi are scheduled to speak at McMaster University's "Gandhi 150 - Waging Action on Hate and Racism" conference, even though they are open and strong advocates of the Boycott, Divestment and Sanctions (BDS) movement. BDS is a hateful and racist movement that singles out Israel and violates Canada's accepted definition of antisemitism.

The conference's stated goal is "to work with the diverse communities of Hamilton and [the] region towards the realization of a culture of peace and inclusion." The question, however, is – how can these ideals possibly be addressed in a serious way so long as these two speakers, whose views directly contradict the stated goal, are a part of the event?

Responding to these concerns, McMaster wrote that it "regret[s] that B’nai Brith will be withdrawing its support for the conference."

Kubursi, an avid and outspoken supporter of BDS, has supported Nadia Shoufani, a Mississauga-based elementary school teacher who was suspended from the classroom for publicly spewing hateful rhetoric. The rhetoric included support for Ghassan Kanafani, a member of the Popular Front for the Liberation of Palestine (PFLP), a government-listed terrorist group in Canada, and a mastermind of the 1972 Lod Airport Massacre, which killed 26 innocent civilians – including a Canadian, Lonna Sabah. Shoufani referred to Kanafani as a "martyr." She also derided the detention of Georges Ibrahim Abdallah, a militant who had been imprisoned for killing U.S. and Israeli officials.

According to its own website, Kubursi is also affiliated with the Syrian Social Nationalist Party (SSNP) – an extremely radical and violent organization that seeks Syrian domination of the Middle East and has fought on behalf of the brutal Assad regime and Hezbollah terrorist organization. The group refers to Kubursi as its "Political Representative in Canada." B'nai Brith recently exposed an alarming effort by this group to use Canadian politicians at all levels of government as propaganda tools for their cause and has launched a petition .

If you have not yet signed the petition, CLICK HERE.

Kanji is a board member of Canadians for Justice and Peace in the Middle East (CJPME), a staunchly anti-Israel group. This group openly encourages the public to break the law and vandalize products on Canadian store shelves by defacing them with "Boycott Stickers" if they are made in Israel.

Kanji has singled out individual Israelis for criticism and attack. In 2017, she penned a dramatic tirade against actress Gal Gadot, star of that year's Wonder Woman film, and suggested that one cannot truly support women's rights if one also supports the work of the Israeli actress. The piece was filled with anti-Israel myths and conspiracy theories, such as a bizarre claim that Israel was "forcing Palestinians to act as human shields" during the 2014 Gaza conflict.

"The legitimacy and credibility of this conference is greatly wounded by the participation of these two individuals," said Michael Mostyn, Chief Executive Officer of B'nai Brith Canada. "It is an insult to the pursuit of human rights and justice."