It was 70 years ago, upon his arrival as the spiritual leader of Shaar Hashomayim Congregation in the Montreal island suburb of Westmount, that he presided over the first series of Bar Mitzvah ceremonies. A bond was immediately established between these youngsters and the then 27-year-old rabbi.

This coming Saturday, June 3, seven of the surviving Bar Mitzvah boys – Ray Fleming, Mark Bercuvitz, Norman Cohen, Eliezer Gelber, Marvin Goldsmith, Michael Lands, and Mark Shapiro – will be called to the Torah for a special Aliyah. Among those missing from the original 20 will be someone who went on to become one of the world’s most successful recording artists, Leonard Cohen.

“Had Leonard not passed away I believe this would have been the year he participated in one of our reunions,” Rabbi Shuchat told me. “He had a successful career, travelling around the world, so when we gathered for the 50th and 60th anniversaries and other occasions he’d always apologize for being unavailable.”
Rabbi Shuchat will turn 97 on June 9, a day before the bar mitzvah of his youngest grandson. He is a remarkable man who, despite being visually impaired for many years due to Macular Degeneration, remains active at the synagogue as Rabbi Emeritus. He has written a number of books. These include The Gate of Heaven (2000); a history of Congregation Shaar Hashomayim, The Creation: According to the Midrash Rabbah (2002); The Garden of Eden and the Struggle to Be Human: According to the Midrash Rabbah (2006); and Noah, the Flood and the Failure of Man According to the Midrash Rabbah (2013). Another book is being put together now as we speak.

Quite modestly, Rabbi Shuchat insists that he is not the story; the now 83-year-old bar mitzvah boys are. “The fact that I am still here is a God’s doing,” he says. “I must say that this type of reunion is quite unique. If there were any kind of records being kept, then this one would should stand out across the world.” 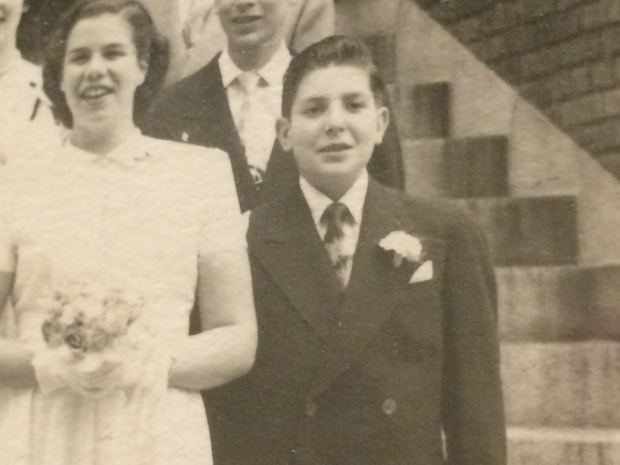 Rabbi Shuchat formally retired in 1993. One of his personal career highlights was conceiving and consulting on the Pavilion of Judaism at Montreal’s World’s Fair, Expo ’67. World-class in both design and content, this marked the only time in history that such a pavilion was featured at a World’s Fair. He studied at, receiving his BA in 1941, and was ordained at the Jewish Theological Seminary of America in 1945, awarding him an honorary D.D. in 1971. He was rabbi in Albany, NY at the Congregation Sons of Israel and after that in Buffalo at Temple Beth El before returning home to the Shaar.

Fleming is so excited about this reunion that he has been calling me since last winter. “It is remarkable that our bar mitzvah group has remained in such close contact all these years,” he says. “And who else can boast about the fact that their mentor, in our case Rabbi Shuchat, is still there for them 70 years later?”

Fleming and Gelber had successful careers in real estate. Bercuvitz and Goldsmith were accountants, Shapiro an architect, Cohen in the carpeting business and Lands worked at Future Electronics. He retired, but still works in a similar industry. One other bar mitzvah boy is Steve Bernstein, but he can’t make the reunion.

“It will an honour for us all to be reunited again,” said Fleming. “Rabbi Shuchat is remarkable. He married myself and my two brothers. We have a special connection.”

Adds Elliott Shuchat, the rabbi’s nephew: “What can I possibly say that could add more tribute to a man who believes in what he does and never looked at the rabbinate as a career move this event which Ray Fleming is setting up is more an idea that he had. The rabbi’s daughter Bryna and I both know that this is not a project of Rabbi Shuchat or the Shaar and that he does not want to take centre or right stage for it. Rabbi Shuchat is quite humble.”

So I wished Rabbi Shuchat well, telling I am cannot wait to shake his hand when he stands at the pulpit on his 100th birthday.

Montreal Mike Cohen Opinions Quebec Confidential Rabbi Wilfred Shuchat
Published : May 26, 2017
Do you like this post?
Tweet
Have you experienced antisemitism, racism or discrimination? Report an Incident