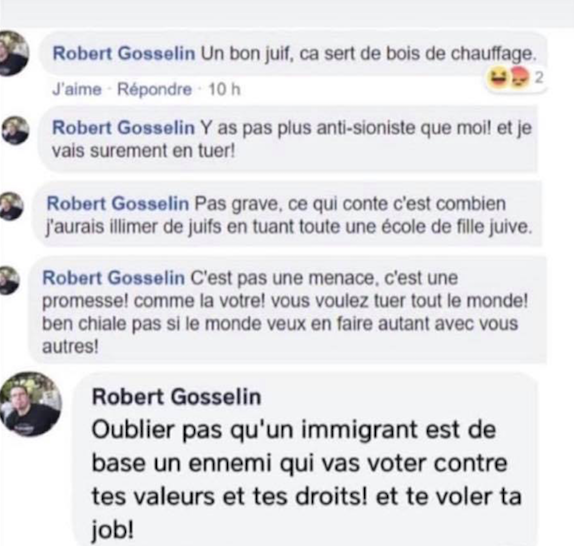 Last week, the Service de Police de la Ville de Montréal (SPVM) arrested Montreal man Robert Gosselin after he made death threats and other offensive antisemitic posts in French on social media, including “A good Jew is only good for firewood,” and “What matters is I will eliminate some Jews by killing an entire school full of Jewish girls. That’s not a threat, it’s a promise!”

B’nai Brith has been in regular contact with the SPVM and its Hate Crimes Unit to communicate the Montreal Jewish community’s security concerns. Detective Line Lemay of the Hate Crimes Unit contacted B’nai Brith’s Quebec office to assure the organization that Gosselin had been charged with the full extent of the law.

On Wednesday, the SPVM issued a statement acknowledging that surveillance has been increased around Montreal areas and schools, and that patrol officers are both “vigilant and available.”

“Unfortunately, as we have seen with the tragic and barbaric attack on Jewish worshippers in Pittsburgh over the weekend, the need for a proactive strategy to tackle antisemitism is as necessary and as urgent as ever,” said Michael Mostyn, Chief Executive Officer of B’nai Brith Canada. “As part of B’nai Brith’s Eight-Point Plan to Tackle Antisemitism, we recommend support for Canadian police officers in their already difficult task of keeping Canadians safe.

“That is why, in following Montreal’s example, we are calling for the institution of dedicated hate crime units in every major Canadian city, with enhanced and specialized training in dealing with hate crimes. A dedicated set of police officers with the necessary resources and expertise can lead to greater deterrence and prosecution rates and keep Canadians from all walks of life safer.”

Gosselin faces three criminal charges in all. Last Friday, he was released on a $500 bond with conditions “that he not use social media and keep the peace.”