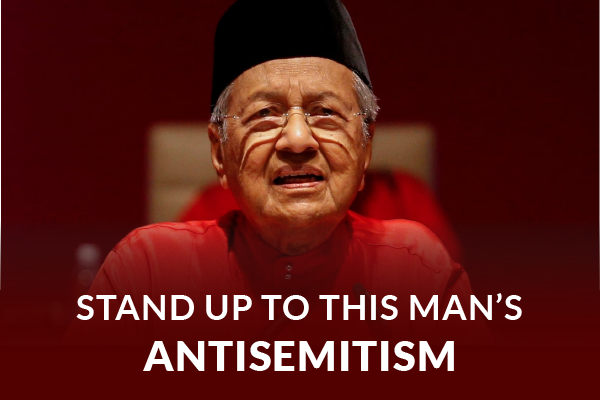 OTTAWA – B'nai Brith Canada is calling on the Canadian and International Paralympic Committees to reject rabid and blatant antisemitism from the Prime Minister of Malaysia, who is barring Israeli athletes from competing in the World Para Swimming Championships in his country this July.

Mahathir Mohamad, the oldest Prime Minister in the world at 93, has over the years publicly suggested that “Jews are not merely hook-nosed, but understand money instinctively.” He also is a Holocaust denier and has gone on record as saying the number of Jews killed was fewer than six-million. Mahathir also has blamed all the problems in the Middle East “on the creation of Israel.”

B'nai Brith has asked both committees in separate and strongly worded letters to reject Mahathir’s antisemitic ban of Israeli athletes, stand in solidarity with Jewish athletes, and relocate the event to a country that does not discriminate based on national origin.

We are now asking you to do the same. Please sign our petition.

Retired Jewish Canadian athlete Paul Rosen, who tended net for Canada’s gold medal wins in the Paralympic Games, is in full support of our calls for action against Mahathir.

“I am beyond livid that this antisemitic scumbag in Malaysia would have the audacity to try and ban Israeli athletes,” said Rosen, who also has represented Canada at the Paralympics in sitting volleyball. “To me, this is downright inhumane and criminal. Every country in the world should boycott these championships in Malaysia.

“Those of us who have qualified as Paralympic athletes give all we have – all our sweat, blood and tears – for the opportunity to compete. For one lunatic to take away our dreams like this is preposterous.  As a former Paralympic goalie who represented Canada with pride, and who had to experience antisemitism from opponents on the ice, I am appalled and sickened by this man's statements and stance and I hope like hell that all of us – Jews and non-Jews alike – stand in solidarity.”

“Prime Minister Mahathir has spewed his antisemitic bile for decades. This surely hasn’t escaped the attention of the International Paralympic Committee, which claims that its vision is to ‘touch the heart of all people for a more equitable society.’ What does the IPC think is so equitable about a country that bans Jewish athletes? Malaysia is clearly undeserving of being the host of such an important athletic competition.”

Paralympics Mahathir Mohamad Paralympic Games International Paralympic Committee
Published : Jan 22, 2019
Do you like this post?
Tweet
Have you experienced antisemitism, racism or discrimination? Report an Incident