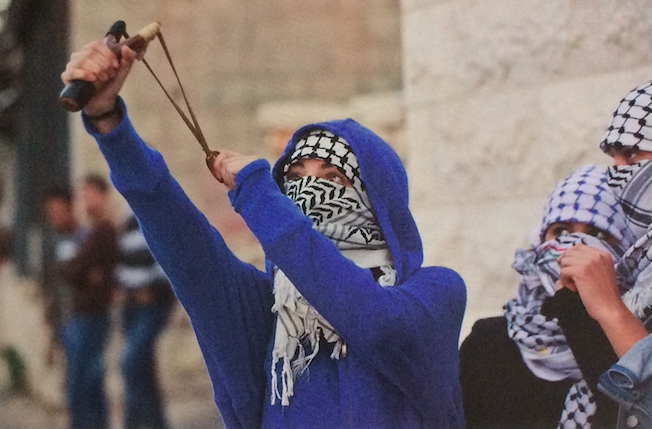 Picture from "Choreographies of Resistance" pamphlet

The display, entitled "Choreographies of Resistance," glorifies the actions of Palestinian protesters, including stone-throwers who promote violence under the guise of resistance. In Israel, a reported fourteen civilians have been murdered by Palestinian stone-throwers, including infants such as Adele Biton and Yehuda Shoham, as well as three Israeli Arabs who were attacked because they were mistaken for Jews.

The creator of the exhibit is Rehab Nazzal, the sister of Palestinian terrorist leader Khaled Nazzal. In 2014, Rehab drew condemnation for a similar display at Ottawa City Hall which glorified Khaled and other Palestinian terrorists. Rehab continues to justify terrorist attacks plotted by her brother, including the 1974 massacre of 22 Israeli schoolchildren, describing him as a "martyr" who fought for "justice."

Despite Rehab's abuse of art to whitewash acts of terror, research by B'nai Brith shows that the SSHRC handed her $35,000 in 2015 in order to continue her work.

"It is irresponsible that taxpayer dollars are being used to finance this anti-Israel exhibit," said Michael Mostyn, Chief Executive Officer of B'nai Brith Canada.

"The false narrative of victimhood on display at this exhibit deliberately ignores Palestinian car rammings, suicide bombings, the recent knife intifada and lethal use of rocks targeting civilians due to a continual campaign of incitement. Rehab Nazzal's public support for her terrorist brother is deplorable."

The McIntosh Gallery says the exhibit "pays tribute to Palestinians who have lost their lives in what the artist notes is an 'intifada, or uprising.'" The term ‘intifada’ actually refers to violent Palestinian uprisings that have left thousands of Israeli civilians dead or wounded.