The first incident came on March 30 at York University in Toronto, where a large swastika and the world “heil” was found scrawled in a men’s bathroom. At the beginning of March, swastikas were also found in a York classroom, followed by the repeated evacuation of buildings at the university’s Glendon campus due to bomb threats, some of which were antisemitic in nature.

On the very same day, B’nai Brith Canada became aware of antisemitic graffiti at the University of Winnipeg, which falsely claimed that, “The 1% is 99% Jewish” and provided links to an antisemitic website. At a meeting on March 29, members of the University of Winnipeg Students’ Association considered, but ultimately did not pass, a motion endorsing the anti-Israel boycott, divestment and sanctions (BDS) movement. 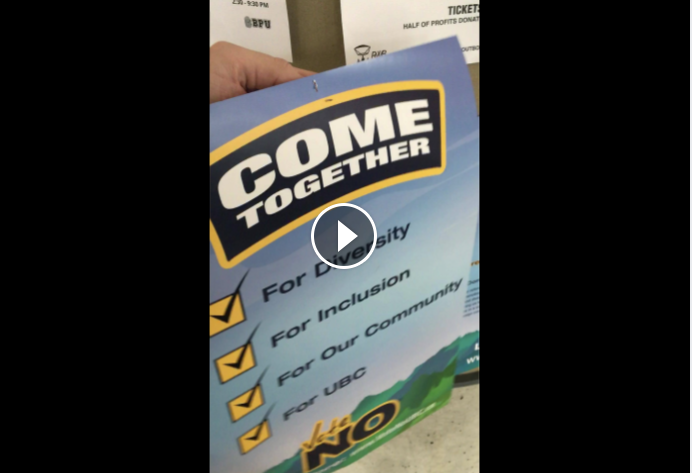 Finally, over the course of the past week, posters urging UBC students to vote against BDS in an ongoing referendum were either systematically destroyed or defaced. The official campus pro-BDS group, for its part, took to Facebook to “encourage” its supporters not to deface posters, without explicitly condemning those who did so. On April 2, B’nai Brith revealed that scarves with Hamas-linked slogans were sold at a recent anti-Israel event on campus.

“It is deeply disturbing to see continued evidence of baseless hatred against Jews on university campuses, which are supposed to be beacons of enlightenment and tolerance,” said Amanda Hohmann, National Director of B’nai Brith Canada’s League for Human Rights. “The fact that two of these incidents coincided with local votes on the BDS movement cannot be ignored, and provides further evidence that these campaigns fuel antisemitism.”