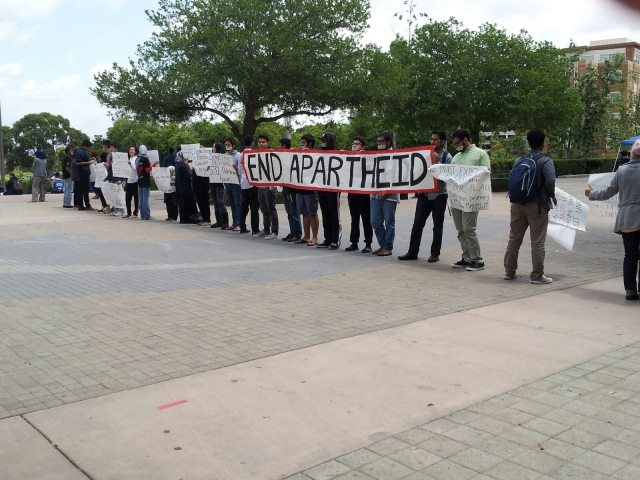 The University of California's Irvine (UCI) campus has sanctioned pro-Palestinian group Students for Justice in Palestine (SJP) for disrupting a film screening and intimidating Jewish students.

The pro-Palestinian group protested the screening of Israeli film Beneath The Helmet, which was hosted by Students Supporting Israel  (SSI) and Hillel. The students were swarmed by over 50 students protesting outside their movie screening, which was held in May. Feeling unsafe, Hillel had to call campus police to escort them from the classroom.

The SJP group was placed under probation last week by the university administration, which will last until March 2017. The probation states that if they cause a disturbance again they will be dissolved and banned from campus. Protesters have to attend an educational program about tolerance and peaceful assembly on campus.

The protesters brought signs and made threatening chants at the Jewish students. The SJP protesters were calling for intifada, violence directed towards Israelis. One student at Hillel's film screening felt so hopeless that she had to hide from the mob of protesters in a nearby building.

Vice Chancellor Thomas Parham wrote a letter  that was sent out to all UCI students on Aug. 18, "The investigators found that Students for Justice in Palestine (SJP), the group that organized and led the protest, violated Student Conduct Policies regarding disruption: ‘Obstruction or disruption of teaching, research, administration, disciplinary procedures, or other University activities.'"

The SJP wrote an open letter to the university after the protest took place. The SJP said that its actions were "wholly justified" in protesting the film because "the presence of the IDF, better known as Israeli Occupation Forces (IOF), and police threatened our coalition of Arab, Jewish, Black, Latino, API, undocumented, trans, and queer students and the greater activist community. Our demonstration was held to protest the presence of military and police forces on campus, which threaten the lives of Black and Brown people every day."

University of California has been pressured to take an active role in combating antisemitism on campus for the past several months. The university administration has been condemned and called to action by at least 36 advocacy groups. UCI "consistently turns a blind eye to acts of anti-Semitism," said a letter jointly penned by the several dozen groups. SSI founder and president Ilan Sinelnikov threatened to take legal action if the university "sweeps the behavior of the demonstrators under the table."

The Irvine campus has seen at least nine incidents of antisemitism this past year, however Chancellor Howard Gillman says otherwise. The chancellor denied that the university does not have a widespread or historical problem with antisemitism. He said that the school is "consistently praised for (its) efforts at creating an outstanding environment for (its) Jewish students."

The campus has experienced a significant number of antisemitic events for the past decade. In 2010, an aggressive mob of anti-Israel students stopped the speech of Michael Oren, the Israeli Ambassador to the US at the time. The protesting  students, were arrested, prosecuted and sentenced to three years of informal probation, after they were found guilty of conspiracy to disrupt and for disrupting.