A Rise in Housing Settlements is Not Akin to Practicing ‘Apartheid’

The time has come to call the duck a duck. But what if the duck isn’t a duck at all?

In an editorial published Oct. 24, 2017 by CBC Senior Correspondent Neil Macdonald, he charges Israel of being a colonial and apartheid state, citing former politicians and security experts who have warned that the Jewish state practices apartheid. “The time has come to call the duck a duck,” Macdonald writes in a nod to the late Yossi Sarid, a left-wing Israeli politician who was a vocal critic of Israeli policy.

Macdonald’s piece fixates on Israeli Prime Minister Benjamin Netanyahu, his relationship to U.S. President Donald Trump, and of course, the expansion of Jewish settlements in the West Bank (Judea and Samaria). “Since the election of Donald Trump, colonization has surged with an invigorated enthusiasm,” he writes.

But is an alleged rise in housing settlements in disputed territories akin to practicing apartheid? Are the separate roads for Jews and Arabs, the “fortified military barriers” that separate Israel proper from the West Bank and Gaza, and the fact Jewish settlers are “entitled to carry arms and use them in self-defence” synonymous with the racist policies of apartheid-era South Africa? Or are the walls and arms precautions put in place to protect and safeguard Israel’s citizens (which includes settlers) from frequent terrorist attacks, and Netanyahu is simply being unapologetic for building homes on biblical Jewish land?

I would choose the latter characterization.

Let’s define the term ‘apartheid.’ According to the Rome Statute Article 7, apartheid requires the “total systematic oppression and domination by one racial group over any other racial group or groups and committed with the intention of maintaining the regime.”

In his article, Macdonald writes sardonically, “Netanyahu frames it all as a matter of national survival, warning that any land conceded will immediately be occupied by fundamentalist terrorists determined to destroy the State of Israel, with its nuclear weapons, tanks, fighter jets, layered missile defence systems and 600,000-plus active and reserve troops.” 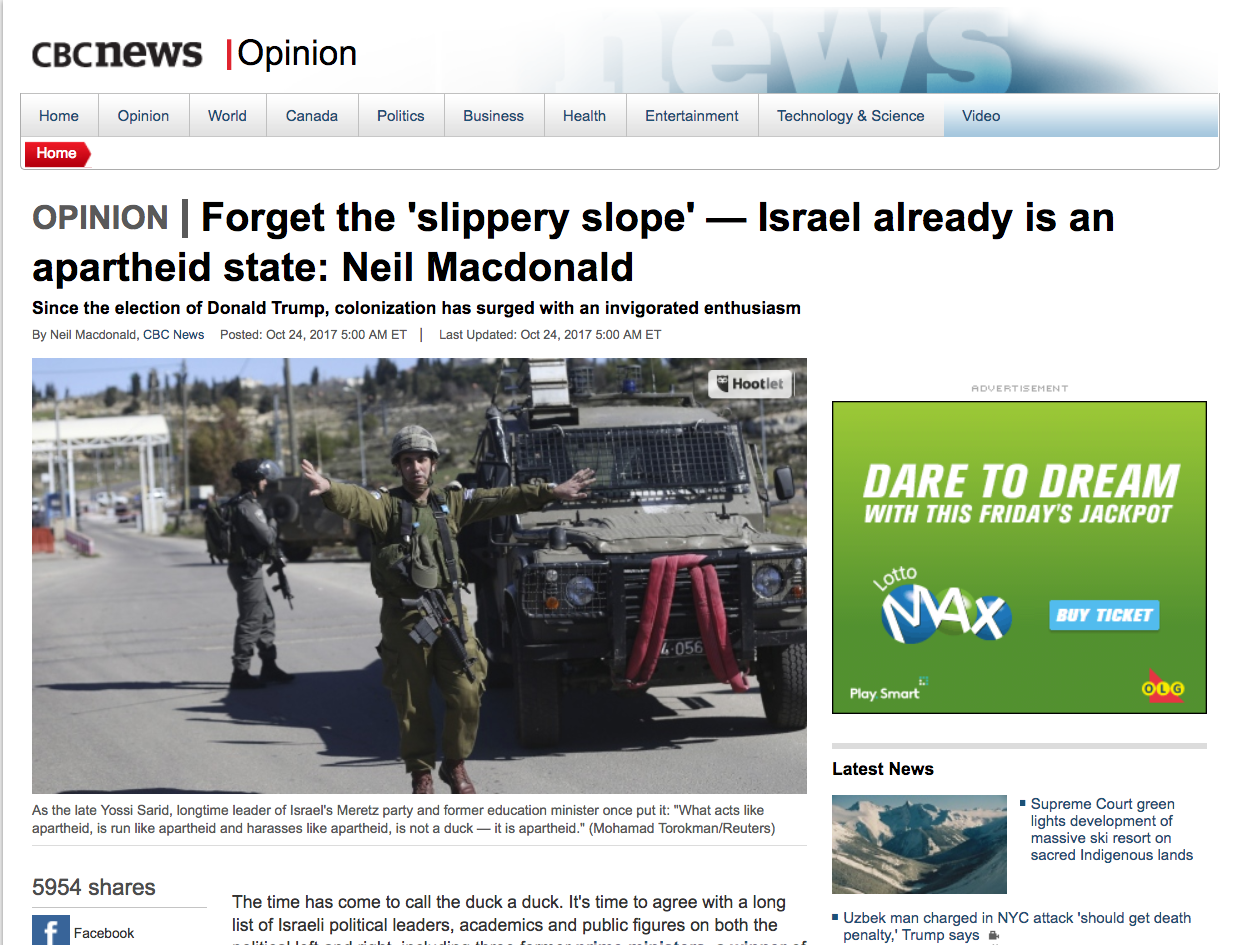 By making this argument, he is actually the architect of his own destruction. In detailing the potential wrath of Israel’s weaponry and reserve troops, Macdonald implies that Israel could in a moment’s notice annihilate the entire Palestinian-Arab population, detain them in labour camps, and systemically oppress and dominate them, per the requirements of apartheid.

But Israel does not do that. It has never done that, not only because it does not practice apartheid, but because that would be anathema to the Zionist dream. The irony also wouldn’t be lost on anyone, given that the modern State of Israel was born in the wake of genocide.

No column, of course, is completely objective. But Macdonald’s piece is crying out for some balance from his anti-Israel bias.

He neglects to mention that there are 1.5 million Arab-Israeli citizens who enjoy full freedoms, like freedom of religion and freedom of sexual orientation. There are Arab-Israeli Members of Knesset and Arab-Israeli doctors, lawyers and accountants. A recent study suggests that a whopping 77 per cent of Israeli-Arabs would prefer to live in Israel as opposed to a future Palestinian state. Arab life expectancy in Israel is 79, the same as in the United States. Israel even passed a bill in 2015 mandating Arabic-language education beginning in the first grade. The bill will help foster a culture of coexistence, according to the politician who introduced it, Likud MK Oren Hazan.

In his article, Macdonald chastises pro-Israel activists who “scrutinize the media,” defends former U.S. President Jimmy Carter (a man who called on the world to recognize Hamas, a terrorist organization that literally calls for the genocide of Jewish people, as a legitimate political party) and seems to paint the entire Israeli government with one giant, sweeping brush.

It does not seem to occur to him that there is a growing left wing in Israel that strongly advocates for Palestinian rights and not even a semblance of such a political faction in the Palestinian Territories. There are no Palestinian leaders who openly support the State of Israel, and neither Hamas nor Fatah could be seen as protectors of the human rights and progressive values Macdonald claims to defend.

Interestingly, this is not the first time he’s pushed the anti-Israel narrative – Honest Reporting has even published a list of his top ten “journalistic transgressions” involving Israel.

In describing “the Palestinian underclass,” Macdonald appears disgruntled that there are security barriers, alleging that such barriers would only exist in an apartheid state, and frustrated that the U.S. and Netanyahu aren’t entirely convinced a formal reconciliation between Fatah and the “terrorists” of Hamas (yes, he actually uses parentheses in describing Hamas as terrorists) will help the peace process.

It would behoove Macdonald to acknowledge the reason for Netanyahu’s trepidation regarding such a pact: Fatah is seen as a “moderate” party in Palestinian politics, while Hamas openly lauds and celebrates the indiscriminate murder of Jewish people. For the two parties to unite is not a step towards peace.

In his case for Israeli apartheid, Macdonald refrains from listing the responsibilities of Hamas and Fatah to their own people. He avoids the knife intifada and Palestinian terrorism all together, the millions spent on terror infrastructure, the compensation paid to the families of “martyrs,” the refusal to accept a Palestinian state by several of its leaders, the treacherous materials distributed to impressionable children, or the important fact that Israel does indeed have legal and historical claims  to the “land of Israel.” That, by the way, is not a term that’s “used by the Israeli right.” It’s a term used by Jews.

At the very most, Macdonald could successfully argue that there are some Israelis who are  in fact racist against Palestinians. But there are racist people in every country, and in every government.

That is not the same as apartheid.

If Macdonald truly cared about the rights and freedoms of Palestinian citizens, then perhaps a logical place to start would be with identifying the failures and transgressions of their own leaders. However, like every other anti-Israel activist, there is only one country – and one government – that deserves the wrath of his condemnation: Israel. Let's accept that, drop the pretense, and move on.

Daniel Koren is the Media Coordinator at B'nai Brith Canada, and formerly the Online Editor of both Shalom Life Magazine and The Canadian Jewish News. He has written extensively on issues pertaining to Jewish culture and the Israel-Palestinian conflict.