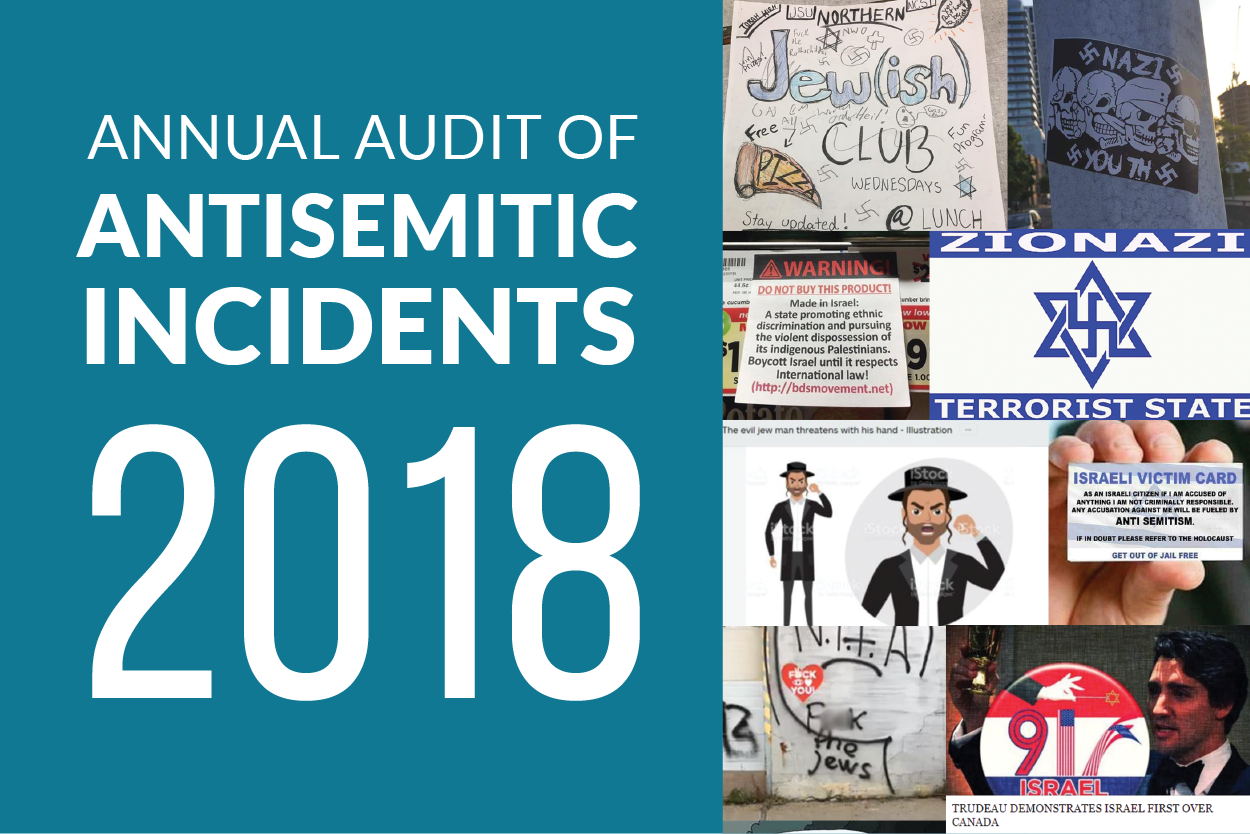 The 2018 Annual Audit of Antisemitic Incidents, produced by B’nai Brith Canada’s advocacy arm, the League for Human Rights, recorded 2,041 incidents of antisemitism, a 16.5 per cent increase over the previous year.

While vandalism and violence continued to target members of Canada’s Jewish community, harassment was the most dominant form of antisemitic expression in 2018, with a 28.4 per cent increase compared with 2017 – representing a 61.5 per cent increase since 2015.

“We are experiencing a disturbing new normal when it comes to antisemitism in this country, with expressions of anti-Jewish hatred surfacing in regions that are typically less prone to such prejudices,” said Michael Mostyn, Chief Executive Officer of B’nai Brith Canada.

“Of particular concern is the rise of antisemitic harassment on social media, including death threats, threats of violence and malicious anti-Jewish comments and rhetoric.”

While the majority of incidents took place in Ontario and Quebec, which experienced a concerning 49.6 per cent increase compared with 2017, there was a significant uptick in the provinces of British Columbia, Manitoba and Saskatchewan as well as parts of Atlantic Canada.

“The massacre of Jewish worshippers at a synagogue in Pittsburgh, just days before a Montreal man threatened online to ‘kill Jewish girls,’ shows us that some individuals sadly make good on their threats. We must always be vigilant against all forms of hatred, which is why B’nai Brith is urging government officials to incorporate the steps outlined in our Eight-Point Plan to Tackle Antisemitism,” Mostyn said.

The plan includes increasing resources for hate-crime units with police forces, a no-tolerance approach to public funding of anti-Jewish events, provincial government action against antisemitism on campus and the adoption of a national-action plan for antisemitism.

Now in its 37th year, the Annual Audit of Antisemitic Incidents, which tracks and monitors trends in antisemitic hatred, is the authoritative document on anti-Jewish bigotry in Canada, cited regularly by law enforcement agencies, government bodies and human rights agencies around the world.

To read the Audit in its entirety, click here.

antisemitism Annual Audit of Antisemitic Incidents Michael Mostyn The League for Human Rights
Published : Apr 29, 2019
Do you like this post?
Tweet
Have you experienced antisemitism, racism or discrimination? Report an Incident