We Must All Condemn Anti-Black Racism 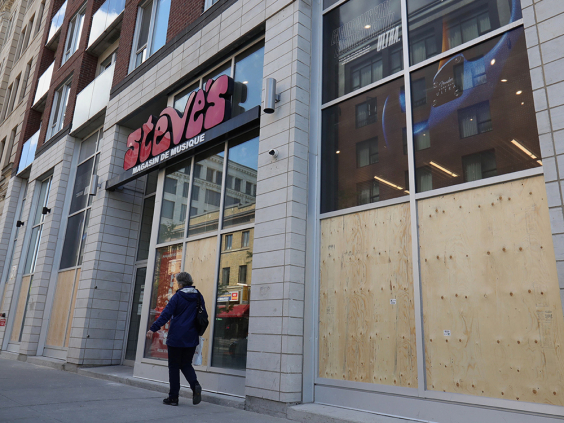 A boarded-up window on a Montreal store, following a looting this past weekend (Montreal Gazette)

TORONTO – During this difficult time, B’nai Brith Canada’s Special Advisory Council to the League for Human Rights (SAC-LHR) wishes to express solidarity with those mourning the killing of George Floyd and anti-black racism in the United States, Canada and around the world.

The SAC-LHR is a group of 25 liaisons from the diverse communities that are reflective of the new face of Canada. The group has worked together for more than 18 years.

Hatred and bigotry should have no place in society, and there is no excuse for the horrific instances of racism and police brutality that the African-American community has had to endure.

We ask Canadians of all backgrounds to join us in praying for the family. We hope that justice will prevail in this case and that it can help bring meaningful societal change against ongoing global racism. As we watch the horrific scenes of violence and destruction in the streets of major cities, we pray for dialogue and progress to prevail and for peace to be restored as quickly as possible. B’nai Brith condemns all forms of violence, and is particularly disturbed by reports of vandalism of sacred sanctuaries where people of all colours and races gather in prayer.

Above all, we pray for healing and reconciliation between people of all backgrounds, and for an end to the disgrace that is racism and hate.

“In the aftermath of the tragic and inexcusable killing of George Floyd, along with related cases where African-Americans have been targeted and slain merely because of the colour of their skin, it is heartbreaking to witness the violence that has erupted across the United States over the past few days,” said Michael Mostyn, Chief Executive Officer of B'nai Brith Canada. “We hope that peace will prevail, and that justice will ultimately be achieved for all those affected.”

“The immediate and overwhelming reaction of the affected minority community is understandable,” said Dr. Aubrey Zidenberg, Chair of the Special Advisory Council to the League for Human Rights (SAC-LHR). “While we condemn the violent and destructive behavior of some demonstrators in recent days, we call for just reforms across all democratic societies who value human rights and equality.

“It is our hope that this tragic and painful moment will soon pass and that we can begin a new chapter aimed at interracial harmony and coexistence.”

“This is a time for us all not only to bear witness to what’s occurring south of our border, but also to give sober reflection on the state of racial relations in our own land – where racism has unfortunately reared its ugly head from time to time,” said Charles “Spider” Jones, former three-time Golden Glove Champion, veteran broadcaster, member of the SAC-LHR and founder of Believe To Achieve Organization, which assists kids, ages 8-16, in after-school personal development and mentorship programs. “It must be confronted in all its manifestations, no matter where or in what form it is found.”

“Let’s all stand united in the goal of expunging all signs of bigotry, racial intolerance and inequality from our great and vast land,” said Howard Shearer, member of the SAC-LHR and the son of the former Prime Minister of Jamaica. “Together, we will all get through this and the brighter day we have long dreamed about might soon come.”

“The inexcusable and blatant police brutality that killed George Floyd and the overwhelming uprising in the United States and beyond since then is certainly not what Martin Luther King Jr. wished for when he said, 'I have a dream.' Fifty-seven years later, not a lot has changed,” said Ben Soave, Retired Chief Superintendent RCMP and another founding member of the SAC-LHR. “Police brutality has most often been and will likely continue to be the spark that ignites both peaceful and violent, destructive demonstrations such as what we have today.

“Politicians, legislators and enforcement agencies can wordsmith policy and policing standards, but it will not change the behaviour of a very small minority of police officers or others who are outright racists. This small group will continue to tarnish and hurt the reputation of enforcement agencies and the majority of hardworking, caring and passionate police officers of every race and colour who put their lives on the line every day. Tolerance, understanding, empathy and meaningful participation by both sides is a beginning for positive change to occur. It is a long and difficult journey and it will not happen overnight. 'I have a dream,' but it will take a lot of people, hope, blood, sweat and tears to make that dream come true.”

As a leading human rights organization, B'nai Brith has long advocated for the rights of minorities globally and will always continue to do so.