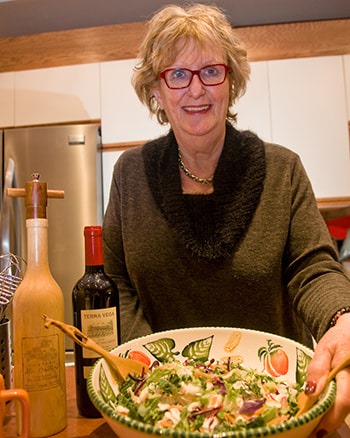 MONTREAL - When my late grandmother passed away almost 30 years ago, I assumed the lease of her apartment. I had been on my own for a while already and knew how to make some simple dishes. As I went through her kitchen, I came across a book called Second Helpings, Please! It immediately became my cooking bible and continued to be so as I got married and became a parent. Today, it always remains a “go to” publication for meal preparation.

First published in 1968, this cookbook was the brainchild of the lady known as Canada’s Julia Child, Norene Gilletz. To date, it has sold more than 175,000 copies. It was produced by Gilletz in conjunction with the Mount Sinai chapter of B’nai Brith Women, with more than 500 recipes.

In November 2018, B’nai Brith Canada hosted a notable gala dinner event in Toronto, celebrating Norene’s work and bringing people together over her wonderful recipes. Norene graciously moderated the event and helped make possible one of the highlights of the year for the Toronto Jewish community.

This past Sunday, the Gilletz family announced with great sadness that Norene had passed away peacefully, with her loved ones by her side. She had been in failing health for some time. Her legacy will live on in her many cookbooks in kitchens around the world.

I had the good fortune of meeting Norene for the first time a few years ago at a book signing. Prior to that, we communicated by phone and email on several occasions. I also know some of her children.

Condolences are already pouring in from across the globe – notably on her Facebook page, “Norene’s Kitchen.” It has more than 14,000 likes.

“She was my mentor and got me into the field of cooking,” said Norene’s son Doug, a chef and cooking instructor at a local culinary institute. “Her legacy will continue with me as best as I can, but Norene will always be my ‘go to’ person for a question in my heart.”

Norene spent most of the past few decades living in Toronto. Doug said he will do an event in her honour at her synagogue, Beth Tikvah, sharing recipes from her final cookbook called The Brain Boosting Diet. She co-authored it with Dr. Edward Wein. Packed with over 200 recipes, the book provides solid health and nutritional advice for people with memory loss, possible dementia, and even Alzheimer’s disease (AD). The book also shows the reader how to slow down potential cognitive decline. It is augmented with lots of unusual but important “Do You Know?” health facts.

Asked how she learned to cook, Norene said in one interview that it was by watching her mom and both of her grandmothers. “I was always fascinated by how ingredients transformed into such delicious meals,” she said. “My first cooking classes were around with Jacques Pepin, who inspired me. After that, I took more classes and ran a cooking school in Montreal. I often learned from guest chefs I brought in. I also read cookbooks rather than novels, and learned a lot from the Food Network.”

The author of a dozen cookbooks, including The Silver Platter: Simple to Spectacular (co-authored with Daniella Silver of Toronto), Norene was also a cooking teacher/lecturer, food writer, recipe editor, food consultant, and spokesperson. Her motto was "Food that's good for you should taste good!" She was the first recipient of The Gil Marks Memorial Award.  Her website, at www.gourmania.com, will likely be maintained by her family.

“Today my world was shaken to its core,” commented friend Rena Moosa Bernstein. “The world lost a woman I adored and admired who really inspired me as a young bride to learn how to cook through her epic cookbook, Second Helpings. Last week, I ordered The Brain Boosting Diet. I will treasure it. Norene was a thoughtful, caring mensch. She was so good to our family during our daughter's illness and passing. She was a friend, a cooking maven, and had the wittiest answers to all kinds of questions.”

Another friend, Irene Namer, added: “The Jewish community lost the Julia Child of kosher cooking. She is and always has been extremely talented. I own all her cookbooks. I’ve cherished her recipes as they’ve been handed down to me since childhood. I appreciate her talented skills that she’s taught many people, including me, through the art of her recipes. She will be sadly missed but forever in my heart.”

Norene is survived by her children and grandchildren, Jodi, Paul, Lauren and Camille Sprackman, Steven, Cheryl and Max Gilletz and Doug, Ariane, Sam and Zak Gilletz – and her beloved Noreners. Funeral services will be held this week at Paperman and Sons in Montreal.