In May of 2016, Lascaris visited Israel and met with Muhammad Alayan, father of Bahaa Alayan. On October 21, 2015, Bahaa boarded a Jerusalem bus with an accomplice and stabbed three innocent civilians to death -- Richard Lakin, Alon Govberg and Haim Haviv. Bahaa Alayan was killed by Israeli security forces responding to the terrorist attack, while his accomplice, Bilal Abu Ghanem, was arrested and received three life sentences from an Israeli court. The attack was praised by the Hamas terrorist group, which produced a sickening re-enactment video to the delight of its followers.

In a public Facebook post, Lascaris claimed that Bahaa had been “killed extrajudicially by Israeli authorities”, and pledged to help his father in recovering his body. 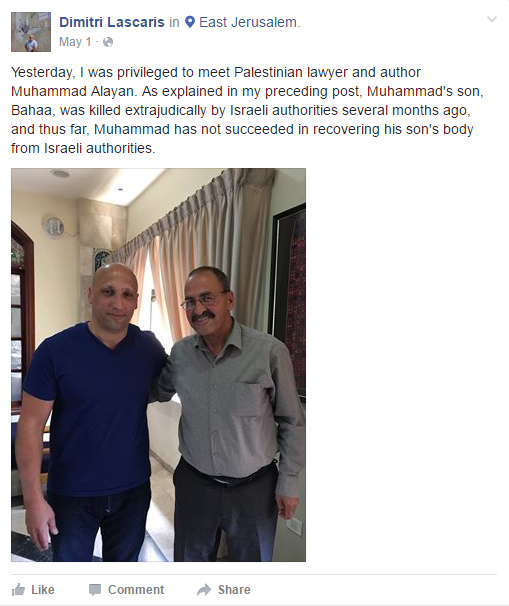 “The suggestion that police acted ‘extrajudicially’ in defending civilians from a rampaging terrorist who had just murdered three people is ludicrous,” said Michael Mostyn, Chief Executive Officer of B’nai Brith Canada. “These sorts of terrorist acts are a rising global threat, and Lascaris’ statement is tantamount to condemning French police for killing the terrorist who massacred innocents in Nice recently. Governments have the obligation to protect their citizens from terrorists, be they in Canada, France, Israel or anywhere. Someone who aspires to be the Minister of Justice should be particularly sensitive to such matters.”

There is more. In a November 2015 Twitter exchange with a Canadian reporter, Lascaris repeatedly refused to characterize Hamas as a terrorist organization, even though it is listed as such by the Government of Canada and its covenant explicitly encourages attacks against Jewish civilians. Lascaris went on to assert that “Israel’s terror far surpasses that of Hamas.”

On his publicly accessible Facebook page, Lascaris also has shared articles from Veterans Today, an American white supremacist website that accuses the Jewish people of conspiring to execute the 9/11 terrorist attacks, the assassination of former American President John F. Kennedy, and numerous other tragedies.

“In light of these revelations, we are calling on Green Party Leader Elizabeth May to immediately dismiss Lascaris from her Shadow Cabinet,” Mostyn added. “While B’nai Brith has reached out to Ms. May directly on this issue, her spokesperson has told us that she has not yet had time to review our documentation. Now that this information is being made public, we hope that she will immediately do what’s right.”

Despite May’s claim to have not yet reviewed the information on Lascaris, the Green Party Justice Critic pre-emptively took to Facebook Thursday morning, suggesting in a post that “scurrilous and false accusations from B’nai Brith Canada” could be coming. A Green Party source confessed to B’nai Brith that they had tipped off Lascaris that B’nai Brith was conducting an investigation into his actions. May had asked Mostyn last week for confidential information that B’nai Brith had gathered about Lascaris and B'nai Brith complied. The source told B’nai Brith that May had not had time to review the information and said they regretted telling Lascaris about the investigation.

Mostyn said: “Isn’t it ironic that Lascaris is suggesting B’nai Brith would make false accusations on his Facebook page, when all we are doing is reporting his own words, that he used, on Facebook?”

Lascaris submitted the anti-Israel boycott motion that will be considered at the Green Party’s annual convention in Ottawa this weekend. He was also the party’s candidate for London West in the 2015 federal election.