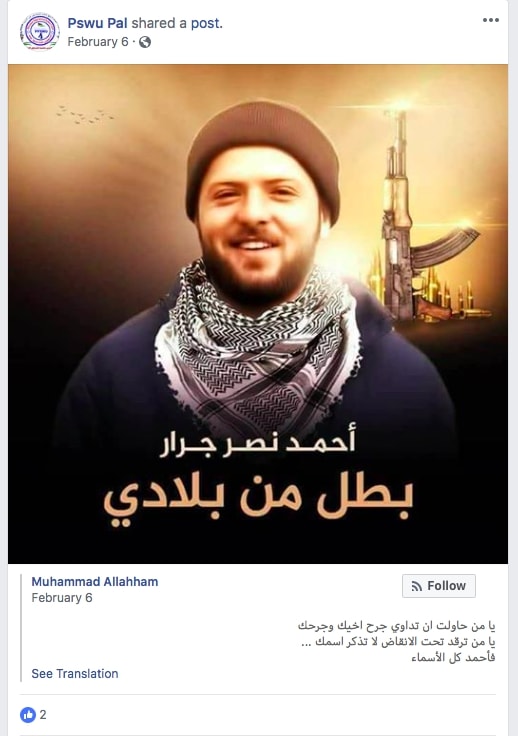 A Facebook post by the Palestinian Postal Service Workers Union, hailing Hamas terrorist
Ahmad Nasr Jarrar as "a hero of my country."

TORONTO – A labour union representing 50,000 Canada Post employees has aligned itself with a Palestinian counterpart that supports terrorism and the elimination of Israel, B’nai Brith Canada has learned.

In a statement issued May 30, the Canadian Union of Postal Workers (CUPW) said it “has a joint project with the (Palestinian Postal Service Workers Union) designed to strengthen the Palestinian postal union and build greater solidarity between our two unions.” CUPW also hailed a recent visit to Canada by Imad Temeiza, President of the PPSWU.

On its official Facebook page, the PPSWU has twice glorified Palestinian terrorist Ahmad Nasr Jarrar, hailing him as a “hero of my country.” Jarrar was a member of Hamas, a designated terrorist entity in Canada, who murdered Israeli Rabbi Raziel Shevach on January 9, before being killed in a shootout with Israeli forces in February.

Another recent post from the PPSWU page calls for the release from prison of Fuad Shubaki, who was convicted in 2009 of attempting to smuggle tens of thousands of weapons into the Gaza Strip for use by the al-Aqsa Martyrs’ Brigade, another designated terrorist entity in Canada.

Alon Katzakevich, an Israeli-Canadian member of CUPW who lives in Winnipeg, told B’nai Brith that the union’s statements left him “shocked and concerned.”

“Be my guest to explain to my kids why they grew up without a grandmother who was murdered by Palestinian terrorists,” Katzakevich continued.

“Rather than using the union movement to build peace between Israel and the Palestinians, the CUPW leadership has aligned itself with the path of violence and extremism,” said Michael Mostyn, Chief Executive Officer of B’nai Brith Canada. “This is both deeply immoral and obviously not in the best interests of Canadian postal workers.” 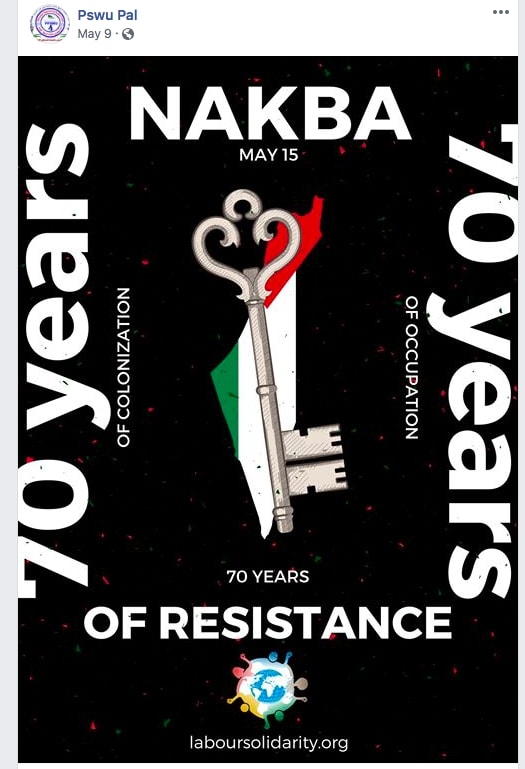 Images from PPSWU’s Facebook page also indicate that it supports the total annihilation of the Jewish State, rather than a two-state solution. This extremist position is consistent with that of the antisemitic boycott, divestment and sanctions (BDS) Movement, which CUPW endorsed back in 2008.

CUPW did not respond to inquiries from B’nai Brith Canada.