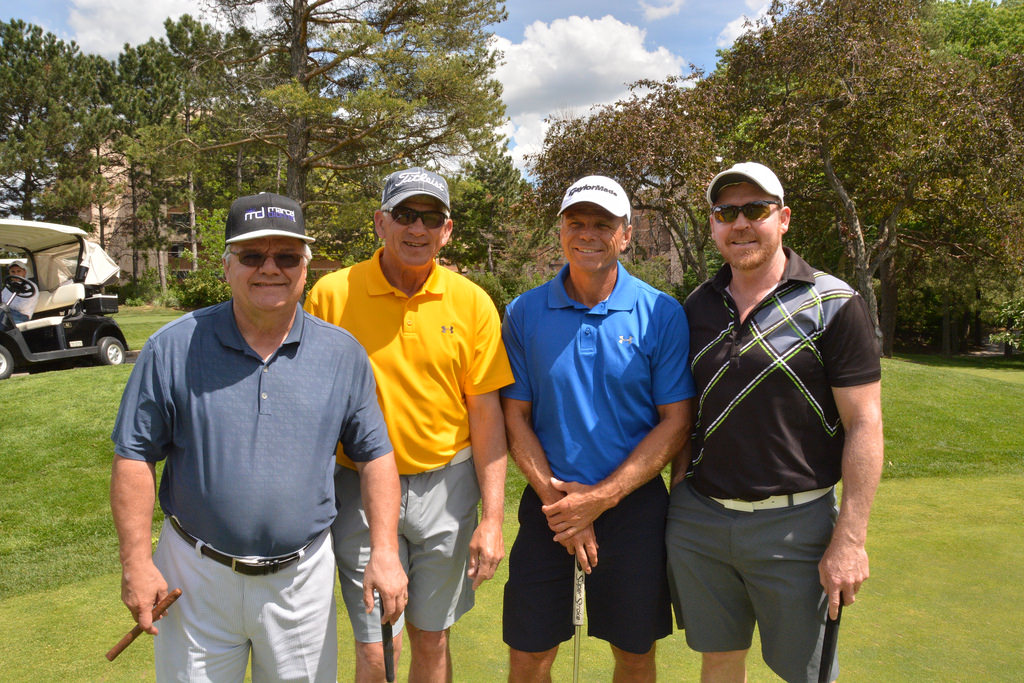 Well, even wordsmiths might be challenged to emerge with words appropriate enough to describe the First Annual B'nai Brith Charity Golf Classic, held Monday at the picturesque Oakdale Golf and Country Club in Toronto.

It was either extraordinary, remarkable, amazing, incredible, wonderful, unbelievable or excellent.

Or all of the above.

If I do say so myself. And, since I was appointed the chief organizer of this event by B'nai Brith Canada CEO Michael Mostyn, and the chairman of the event by the committee that was formed to oversee it, I will indeed say so myself. Thank you.

Listen, how couldn't I say it? It was sold out. The participants were all smiling and openly pleased. The weather was perfect, the food was excellent, the service provided was first-rate, the volunteers were fantastic, the course and club at Oakdale were fabulous, the. . .

But it had to be great because even David Lieberman of Avison Young said it was. He took time out from his dominant performance to tell Michael and I this at the tournament at least three times. And then he sent an email to us echoing his sentiments. And, while David's a cool dude, he's not usually that nice. So it had to be great.

David truly is an outstanding golfer and his foursome, which included Hylton Levy, Josh Garr and Todd Schweber, should be commended because they were awarded the first-place trophy. Not that they actually finished first. The foursome that really won -- but didn't receive the trophy because, well, they were TOO good -- were former all-star NHL players Marcel Dionne, Mike Gartner, Rick Vaive and Gary Leeman.

What a performance these four superstars put on -- not only on the course but also in the dining room afterward.

Class, all the way. They signed autographs, posed for photos and joined comedians Naomi Snieckus and Matt Baram on the stage to provide some of the biggest laughs of the day and evening.

Dionne, the Hall of Famer most renowned for his sensational career with primarily the Los Angeles Kings, even sold a couple of his 1972 Team Canada jerseys for the cause -- the proceeds from the tournament went to B'nai Brith's heavily subsidized Senior Citizens' program -- and he was hilarious in the process.

One of his customers was Handsome Howard Kamin, who sat on our golf committee and brought a few dozen of his friends to the event. Howard's usually the funniest guy in a room, but on this day, he wasn't even in the Top 5.

The comedians and the hockey players, for instance, had him topped. Dionne, at one point, mentioned that ours was the first charity golf tournament he was ever in that featured four NHLers who all scored at least 50 goals in a season during their illustrious careers. Marcel then mentioned he had six 50-goal seasons, causing Leeman to grab the microphone out of Dionne's hand to say: "Passing the puck once in awhile wouldn't have killed you." Or something like that.

It was just a superb day, and I'm fortunate to be part of it. Thank you to Michael, B'nai Brith National President Henry Schnurbach and committee members David Berger, Victor Arluk, Paul Habert, Nissim Kehimkar, Lorne Rose and, yes, Handsome Howard Kamin for being involved in this. Thank you also to Lori Dowling, who made it all possible with her professional assistance and organization.

Thank you to all of our generous sponsors, donors and players. Of course, this event doesn't even exist without you.

And thank you to all the B'nai Brith staff members who contributed enough to make it possible for David Lieberman to actually compliment us. 😊

Hope to see everyone back next year at the Second Annual B'nai Brith Charity Golf Classic.