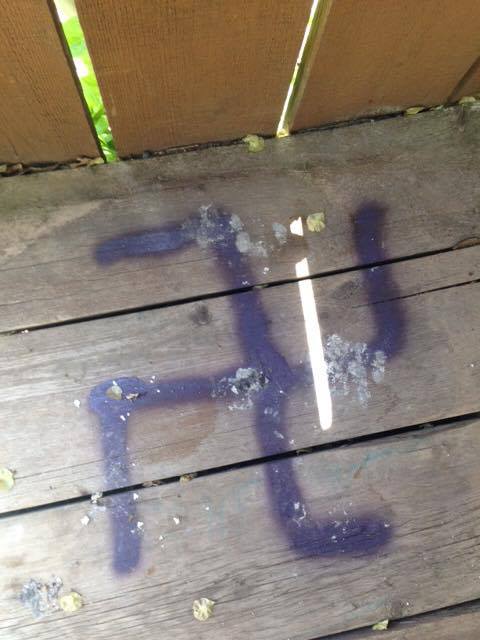 B’nai Brith’s swift response in removing the graffiti was due in part to Corey Fleischer, who has recently become a local hero for his efforts in removing swastikas, racial and antisemitic slurs, and other forms of hate-filled graffiti from the streets of Montreal.

At first, Fleischer, who owns a power-washing business in Montreal, removed the graffiti because of his moral duty to defend his city. Now, after receiving tremendous media exposure across Canada, Fleischer says he’s helping to front a movement where Canadians from across the country will band together with one goal: to erase hate.

For Fleischer, teaming up with B’nai Brith – which has tracked antisemitic violence, harassment, vandalism and discrimination through its annual Audit of Antisemitic Incidents for the past 35 years – was an obvious choice, due to the scope of its resources.

Helping to remove the graffiti in Winnipeg, for example, was his first time erasing hate in that part of Canada.

“I’m always happy to hear that by the time they [the victims] get home from work, that the graffiti was already erased, and they can rest easy,” Fleischer says.

Fleischer’s goal with the Erasing Hate movement is to be able to swiftly remove graffiti from both public and private properties, noting that when victims are targeted at home, they are usually left to pay for the removal of the graffiti themselves. “It costs a lot of money to get it removed,” he says.

By teaming up with B’nai Brith, Fleischer says that “Erasing Hate will be able to better target (and fix) the discrimination and racism that is prevalent in Canada and around the world.”

He also hopes to soon bring his movement to Europe (specifically France, Germany and Poland), South America, and other parts of North America.

Today, Fleischer says that, thanks to volunteers with the Erasing Hate movement, he's been able to clean up some 35 racist or antisemitic incidents in an hour.  Not bad for someone who used to remove 50 swastikas from the streets of Montreal every year. And, as he says, this is only the beginning.