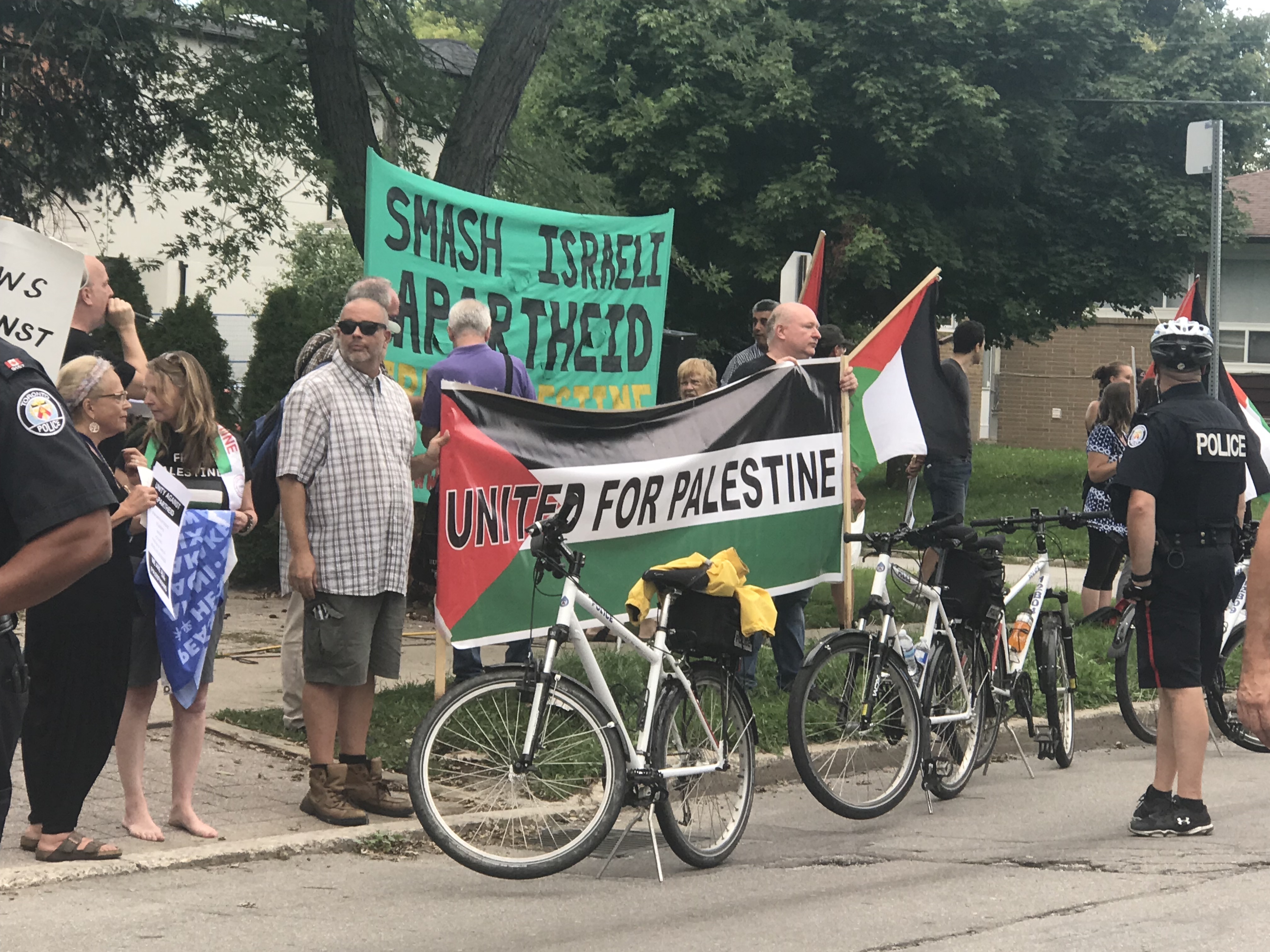 TORONTO – A few dozen activists protested outside B’nai Brith Canada headquarters in Toronto Wednesday in a rally to support the Canadian Union of Postal Workers (CUPW).

B’nai Brith recently condemned the union for aligning itself with a Palestinian counterpart that supports terrorism and the elimination of Israel.

The event was organized by former Green Party Justice Critic Dimitri Lascaris, an anti-Israel activist who recently lost a lawsuit against B’nai Brith. Toronto lawyer Stephen Ellis was a co-organizer of Wednesday's gathering.

The anti-B’nai Brith demonstrators were greatly outnumbered by a throng of counter-protesting Canadians who were deeply offended by their angry chants.

During the rally, misguided protesters ranted against Jewish community members on the other side of the street, hollering “Racists go home,” “From the river to the sea, Palestine will be free,” “Israel is a terror state,” and other hate-filled and xenophobic chants. Protesters even personally threatened Michael Mostyn, Chief Executive Officer of B’nai Brith Canada, by shouting, “Hey Michael, what’s the story? Slander us and you’ll be sorry!”

In a Facebook post ahead of the rally, Ellis urged attendees to “confront” Zionists and shared a list of chants, some of which promote violence and obvious falsehoods, including “Resistance is justified when people are occupied!” and “We know what that building’s for! Occupation and war!”

At its Toronto headquarters, B’nai Brith serves up free daily seniors’ programming supporting Holocaust survivors, widows and widowers, war veterans, individuals with disabilities and other vulnerable members of the Jewish community. The building also houses a children’s daycare and synagogue.

After consultations with legal experts, elected officials and police representatives, B’nai Brith decided to refrain from confronting the protesters or giving any advance publicity to their efforts.

“The sentiments of this so-called rally do not represent Canadian values or ethics,” Mostyn said. “This is not the first time these organizers have failed in trying to discredit our organization. B’nai Brith does not engage with individuals who hold such extreme views. This is why we made no prior comment on this issue and chose to refrain from providing them with any of the legitimacy they seem to desperately seek.”

He continued: “This was by no means a ‘spat’ between B’nai Brith and the organizers of this rally, as some have suggested. We merely pointed out that CUPW was aligning itself with an organization that glorifies terrorists. The fact these demonstrators travelled to demonize Israel at a Jewish community centre, in the heart of a Jewish residential neighbourhood in Toronto, shows how far these provocateurs have already crossed the line.”

Despite being billed as a CUPW protest, there was a predictably low number of CUPW members in attendance, despite a press release this week indicating that members of its Toronto chapter would attend.

It is worth pointing out, however, that several current and former Jewish members of CUPW have contacted B’nai Brith in recent weeks to share their frustrations about what they described as unacceptable and inappropriate political and targeted anti-Israel policies from their union’s leadership.

B'nai Brith thanks the men and women of Toronto Police Services, specifically 32 Division, for their great work in keeping the peace and ensuring the safety of local residents.

Had a very productive strategy and security meeting at B’nai Brith Canada HQ in Toronto today. Grateful for the strong support of our elected officials in York Centre @LevittMichael, @Roman_Baber, and @PasternakTO. #cdnpoli pic.twitter.com/NMeOc43p4M

York Centre MP Michael Levitt echoed the sentiments, stating, “While I am relieved that today's protest did not turn violent, I remain deeply concerned that the Bathurst Manor community was targeted... I appreciate the leadership of B'nai Brith Canada and other local organizations in trying to de-escalate this tense situation, and I would like to thank the Toronto Police Service for its attentiveness before and throughout the protest to ensure the safety of local residents.”

Please see below my statement in response to the Planned Protest Targeting @bnaibrithcanada Headquarters in #YorkCentre. For my full statement, please visit: https://t.co/KMBslJVIK1 pic.twitter.com/q4Tp5Fjl9R

Roman Baber, MPP for York Centre, also condemned the rally, saying, “While we value the exercise of free speech, today's rally displayed hatred and spread fear in a small residential neighbourhood of North Toronto. Premier Doug Ford has been clear – there is no room for hatred in Ontario.”

My statement with respect to the protest against B'nai Brith Canada in front of its building today. #ONpoli #YorkCentre pic.twitter.com/FjYBsI43Bv

Toronto City Councillor James Pasternak added: “I am honoured to have B’nai Brith in my Ward and our community is grateful for the important programs and advocacy work they do. These anti-Israel groups ignore every other world conflict zone and are obsessed with demonizing the State of Israel – the only democracy in the Middle East – and the Jewish community of Toronto. Also, these anti-Israel groups have a history of having such hate rallies in Toronto costing the city tens if not hundreds of thousands of dollars and using up the precious resources of police services.”