MONTREAL - Montreal Mayor Denis Coderre has done a lot of things Montreal's Jewish community is grateful for, including a moving mission to Israel and helping launch B'nai Brith's annual Yom HaShoah ceremony at City Hall. However, his dismissal of a high-ranking and long-serving Jewish city councillor from a prestigious post is not going over very well.

Marvin Rotrand has been the city councillor for the district of Snowdon since 1982. Just a few weeks ago, without any warning, he was relieved of his duties as Vice-Chairman of the Montreal Transit Committee by Mayor Denis Coderre. Rotrand confirmed to me that this action will result in a $33,000 a year pay cut. That is a lot of money for anyone, but especially a man like Rotrand who works as a full-time councillor.

In the last municipal election, Rotrand ran on the team which included present NDG-Côte des Neiges Borough Mayor Russell Copeman (who is also Jewish) as part of Coalition Montreal. The party, headed by economist Marcel Côte, did not fare very well, but when Coderre won the mayoral race with a minority government he cleverly placed Copeman on his Executive Committee and allowed Rotrand to retain his MTC post.

It is clear to see why Coderre dropped Rotrand from a role he loved and replaced him with Elsie Lefebvre. She is a city councillor for Villeray–Saint-Michel–Parc-Extension and won the last election under the Coalition Montreal banner. The former Parti Québecois MNA now sits as an independent, and word has it that Coderre believes his team is weak in that neighbourhood. Lefebvre will run as an independent with the promise of keeping the transit post and probably join Coderre’s party soon after the election is over.

“This comes as a surprise to me and it is an indication of what the population can expect if Denis Coderre wins a majority in the next election,” said Rotrand. 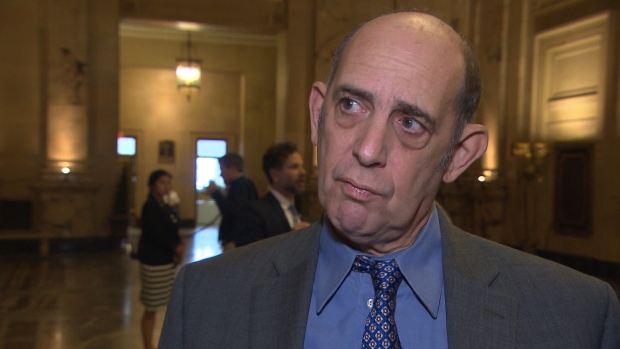 I am not sure if Coderre is aware of just what a remarkable campaigner Rotrand is.  I saw it first-hand when he played an important role in Mount Royal Liberal MP Anthony Housefather’s victory in the 2014 federal election. The media happens to love Rotrand – he is the master of the sound bite and knows how to engineer headline material.

So what does Rotrand do now?  I asked him the other day if he’d join Projet Montréal,  the opposition party which faces a very difficult task in dethroning Coderre. He would not comment. It is clear though that Coderre has made a dangerous enemy in him.

Rumours have it that Rotrand is considering a run for mayor of the NDG-Côte des Neiges Borough. That would pit him against the incumbent, Copeman, who ironically played a role in converting to municipal politics. Copeman, a former Quebec Member of the National Assembly, quit elected politics to accept a government relations job with Concordia University. His profile is high, but the question remains: could he defeat Rotrand one-on-one?

NDG-Côte des Neiges has a history of electing Jewish borough mayors. Prior to Copeman, Michael Applebaum held the job. He eventually became interim mayor of the entire city, was arrested on fraud charges and eventually convicted. Between Applebaum and Copeman, the kippah-wearing Lionel Perez was interim Borough Mayor.

This will be one to watch for sure!